Watching this little boy discover he is going to be a big brother might just be the cutest thing we have seen in a long time.

In a TikTok that quickly went viral, little Sammy is told his mum is finally pregnant, and a sibling is on the way, and honestly – this will melt your heart.

The clip, which has now been viewed more than 2 million times, is clearly touching the hearts of many.

"Sammy has been asking for a sibling ever since he found out what that meant," the caption says in the now-viral TikTok.

"He wished on birthday candles and asked for a sibling."

The video sees the couple sitting down at their dining table when they call in their son, Sammy, and gift him a new t-shirt. When Sammy reads the caption on the shirt, he doesn't seem to get that it means it at first – but then, things get cute very quickly.

On-screen captions explain that the couple had been trying to conceive for quite some time, with the woman undergoing a gastric bypass to increase her chances. Now 18 months later, they all got their wish. 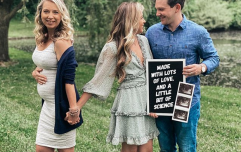 END_OF_DOCUMENT_TOKEN_TO_BE_REPLACED

"What have you been asking for?" his dad prompts, trying to help Sammy understand what it's hinting at.

"I don't know if it's going to be a brother or sister," his mum clarifies.

"We're having a BABY?" he asks excitedly.

Sammy then proceeds to jump into his mum's arms and starts repeating, "Oh my God" and "Thank you so much!" over and over again.

Another cute bit to the clip is when Sammy's parents are seen sharing a little giggle at their son's adorable reaction and there's a moment where he makes sure it's not a joke and honestly, this just made our day.


popular
Boy (14) found guilty of murdering 12-year-old schoolgirl Ava White
"He will always be a danger": James Bulger's dad says son's killer should never be released
Am I a bad dad for encouraging my daughter to be a housewife?
Infant poisoned by nurse "deteriorated quickly", hospital reveals
Saoirse Ruane's mum says their family has been on an "emotional rollercoaster"
Is it fair for mum to choose which grandparent gets to first meet a new baby?
My family flipped out at me for kissing their baby on the head- was I wrong?
You may also like
3 days ago
New mum criticised for admitting she won't bathe her baby until he is a month old
1 week ago
Parenting confession: "My in-laws are gatecrashing our family holiday"
2 weeks ago
'Coastal grandmother' is the viral 2022 fashion vibe you did not see coming
2 weeks ago
A TikTok-er showed the size of an epidural needle, and yep, it's huge
3 weeks ago
Women are sharing pictures of their 'saggy' boobs on social media – and here's why
3 weeks ago
The internet calls this dad's reaction to viral TikTok gender reveal a 'big red flag
Next Page