Male infertility affects up to half of couples who cannot conceive.

Interestingly, a brand new study has shown that healthy men who took the equivalent of two tablespoons of (concentrated) tomato purée a day as a supplement were found to have better quality sperm.

This being, researchers explain, because lycopene - a nutrient found in tomatoes - might just boost sperm quality. Lycopence, in case you don't know, is an antioxidant which means it prevents oxidation in cells, and therefore damage.

Interestingly, the idea that certain nutrients could boost male fertility has been gaining ground for some time, and this new study is certainly a step in the right direction for proving just how powerful our food can be in terms of impact on fertility.

The study, conducted by the University Of Sheffield in the UK, found that taking a supplement with 2 tablespoons of concentrated tomato puree boosts healthy sperm count. The researchers explain they used a supplement because the lycopene there is in a more concentrated form, and also so they could be confident each man received the same amount each day.

In the 12-week trial, 60 men were randomly selected to take 14 milligrams of lactolycopene per day or a dummy pill.

Their sperm was tested at the start, at six weeks and at the end of the study, and while there was no difference in sperm concentration, the proportion of healthy-shaped sperm and motility - how fast sperm can "swim" - was remarkably higher in those taking lycopene.

The results were so surprising that they caused Dr. Allan Pacey, an andrology reproduction professor at the university, to “nearly fall out of his chair.” 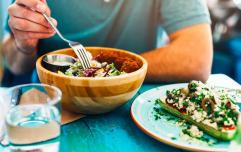 END_OF_DOCUMENT_TOKEN_TO_BE_REPLACED

“The improvement in . . . the size and shape of the sperm was dramatic,” he said in a statement.

Speaking to the BBC, Dr Liz Williams, a specialist in human nutrition at the University of Sheffield, who led the research which was published in the European Journal of Nutrition, said: "At the moment, there is very little advice we can give to men.

"We tell them to reduce alcohol consumption and eat a healthy diet - but these are very general messages."

She added: "This was a small study and we do need to repeat the work in bigger trials, but the results are very encouraging."

The next step, according to Williams, is to repeat the exercise in men with fertility problems and see if lycopene can increase sperm quality for those men and whether it helps couples conceive and avoid invasive fertility treatments.


popular
The most popular baby names in the world have been revealed
The ironing hack that's about to make your everyday life so much easier
Angelina Jolie 'doesn't care' about Brad and Jen's reunion - and unfortunately, she's the only one
Penneys is selling the cosiest grey jumper for just €12, and we need it
Mother of four who died after giving birth becomes 'one in a million' organ donor
Mum shares photo of 7-year-old in car seat to remind parents of car safety
The €30 Penneys jumpsuit that could pass for a designer piece is in stores now
You may also like
4 days ago
This is why maternal grandmothers are especially important to children
4 days ago
Study finds how many hours mums actually work every single week
5 days ago
Babies born via C-section have very different microbiome in their gut than babies born vaginally
5 days ago
We'll take it! Research maintains that carbs are key to a healthy pregnancy
5 days ago
Co-sleeping is perfectly safe – if you breastfeed, says brand new research
6 days ago
Children allowed screen time in the morning are more likely to suffer disturbed behaviour and learning difficulties
Next Page