The findings suggest that black tea, even at higher levels of intake, can be part of a healthy diet.

Irish people are well-known for their love of a nice cupán tae.

Thankfully, new research has found that such pleasures may have health benefits.

A study of nearly half a million tea drinkers in the UK showed that higher intake of the beverage was associated with a "modestly lowered risk of death".

Led by researchers at the National Cancer Institute, part of the National Institutes of Health in the United States, the study analysed the potential mortality benefits of drinking black tea.

Black tea is the most common type of tea consumed in Ireland and the UK. 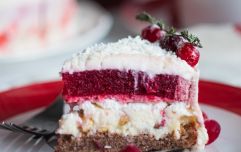 END_OF_DOCUMENT_TOKEN_TO_BE_REPLACED

The analysis involved 498,043 men and women between the ages of 40 and 69 who participated in a large cohort study and were followed up with for about 11 years.

Researchers found that people who consumed two or more cups of tea per day had a 9% to 13% lower risk of death from any cause than people who did not drink tea.

"Higher tea consumption was also associated with a lower risk of death from cardiovascular disease, ischemic heart disease, and stroke," the National Institutes of Health said in a statement.

It added that this was seen regardless of preferred tea temperature, the addition of milk or sugar and genetic variations affecting the rate at which people metabolise caffeine.

The findings were published on Tuesday (30 August) in the Annals of Internal Medicine and can be found here.

popular
Emma Pattison made distressed call to sister before murder-suicide
Dunnes Stores launches stunning collection of Communion dresses
Siblings kidnapped in March 2022 have been found alive
Expert says Cocomelon acts "as a drug" to kids' brains
Vogue Williams opens up about her divorce from Brian McFadden
Shows like Bluey and Peppa Pig are actually bad for kids, expert warns
Stacey Solomon hints at baby girl's name as due date nears
You may also like
1 week ago
Nutritionist warns parents they shouldn’t let their kids drink Prime
1 week ago
Little boy dies of cancer after doctors ignored mother's concerns six times
1 week ago
Irish women call for access to drug to treat Hyperemesis during pregnancy
2 weeks ago
Influencers slated for sharing dangerous advice on contraception
1 month ago
How to support a loved one with an eating disorder this Christmas
2 months ago
HSE advises children with cough or sore throat and fever to stay home
Next Page