Better mark the calendars, Netflix have announced the premiere date for Space Force.

The workplace comedy will see Steve Carell and Greg Daniels, the creator of The Office US, reunite. Lisa Kudrow, John Malkovich, Ben Schwartz and Diana Silvers star in the series.

According to Variety, Carell will star as Mark R. Naird, a decorated pilot and four-star general with dreams of running the Air Force. However, he will instead find himself leading the freshly-formed sixth branch of the armed services: Space Force.

Kudrow will star in the series as Maggie Naird, Mark's wife who has "sublimated parts of herself to her husband’s career for two decades." However, as he's tackling his biggest challenge, she starts to grow in a different direction.

Netflix took to Twitter on Wednesday to share the first look at the series, as they also confirmed the premiere date: May 29.

Steve Carell and The Office US creator Greg Daniels have teamed up again for Space Force (which also stars Lisa Kudrow, John Malkovich, Ben Schwartz and Diana Silvers, in case you needed any more reason to be excited). Landing 29 May. pic.twitter.com/XMnOuhzGBo

In the meantime, there are plenty of binge-worthy movies and TV shows coming to Netflix in the next few weeks. 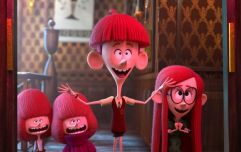 END_OF_DOCUMENT_TOKEN_TO_BE_REPLACED

The Land Before Time, Child's Play, Babe and American Pieare all arriving on Netflix on April 10 - as well as Love, Wedding, Repeat (which you can read more about here).

Outer Banks arrives on April 15, while both The Willoughbys and season five of Peaky Blinders land on April 22.

And finally, the highly anticipated second season of Ricky Gervais' After Life will debut on April 24.

But if you're looking for a list of everything that will be coming to Netflix this month, you can find the list of movies and TV shows arriving in April right here.


popular
#MomLife: 7 things I wish I done more of when my children were babies
Simple parenting trick to help heat up paddling pool water with just bin-liners
Here is what Center Parcs Ireland have said about reopening this summer
Totally tropical baby names inspired by Hawaii
Can you pronouce these 7 'unique' baby names? They're trickier than you think
3 super effective ways to get your child's attention (that doesn't involve shouting)
Suffering with hayfever? The very simple vaseline hack you need to know about
You may also like
1 week ago
Angus, Thongs, and Perfect Snogging is dropping onto Netflix next month
1 week ago
The Big Flower Fight: The wholesome new series we're binging on Netflix
2 weeks ago
11 classic kids TV shows that you can watch on Netflix, YouTube and DisneyPlus
1 month ago
Prince Harry is teaming up with Thomas the Tank Engine, and it's as adorable as it sounds
1 month ago
The official trailer for season 2 of Dead To Me has landed and it looks amazing
1 month ago
The trailer for new Netflix thriller White Lines has landed and we're already freaked
Next Page