Dancing on Ice judge Ashley Banjo and his wife Francesca have welcomed their second child.

The couple welcomed their daughter, Rose Audra, last year - and revealed they were expecting in December 2019.

Taking to Instagram on Friday, the 31-year-old revealed that they had become parents for the second time as they welcomed a baby boy.

"On Thursday the 26th March at 6.45pm our son came into the world weighing a healthy 8lbs 15oz. His name is Micah Grace Banjo," he wrote.

"Our son, our little ray of light in a dark and uncertain time. @francescabanjoand I love him with the deepest part of our hearts."

The couple revealed to fans back in December that they were going to become parents for the second time - with Ashley joking that "it's a good job we like surprises."

"Baby number 2 is officially in the mum oven ladies and gents and I feel so blessed and excited," he continued, alongside a sweet family photo. "Our little family is growing." 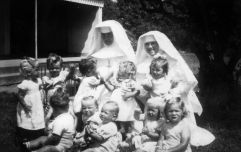 What were the "mass abuses" carried out in mother and baby homes? Here's what survivors, witnesses and historians allege

END_OF_DOCUMENT_TOKEN_TO_BE_REPLACED

Francesca shared the same photo on her own Instagram, where she confirmed that "baby number two is officially pending."

"As [Ashley] said, we feel very luck that our family is growing and that we have been blessed with this little surprise," she wrote.


popular
6-year-old girl who died on theme park ride 'was not buckled in'
Guests criticise bride for not letting rainbow baby attend child-free wedding
Kerry mum issues warning after woman tried to grab her baby boy from his pram
Opinion: I'm tired of seeing parents shamed for not being able to afford 'good food'
Woman returns to Zara in a jumpsuit after getting stuck trying it on
Mum asks what baby name combos to avoid and the results are hilarious
"Will they kill me?": Kristen Stewart stuns as Diana in new trailer for Spencer
You may also like
2 weeks ago
Jennifer Lawrence is expecting her first child with Cooke Maroney
2 months ago
Halsey welcomes her first child and she picked the most touching name
2 months ago
Baby joy for Ashley Graham as she announces her second pregnancy
2 months ago
Amber Heard welcomes baby daughter
1 year ago
Deliciously Ella's Ella Mills reveals she is expecting her second child
1 year ago
Jenna Dewan and Steve Kazee have welcomed their first child together
Next Page