Almost 25 years after starring in the iconic film, the trio will be starring in Family Jewels, a comedy about three women who are forced to spend the holidays together (with their kids and their grandkids) after the man that they were all once married to drops dead suddenly.

According to Deadline, production is set to start later this year. 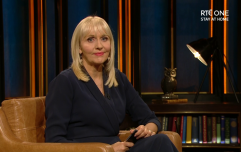 END_OF_DOCUMENT_TOKEN_TO_BE_REPLACED

“The chemistry of Diane, Bette and Goldie is unmatched and irresistible, and I’m thrilled to help reunite them on screen for generations of fans,” Fischer said.

“This movie fits perfectly in our plan to finance and produce four to six major studio theatricals a year and puts movie stars back where they ought to be – on the big screen," Oliver added.

“Brad and I always wanted Peter for this project but he was constantly busy.  To our great joy, after the Cannes sale, we were able to get the three of us united," Nevins said in a statement of his own. "I, and the public, have waited many years for these three ladies to star in another film together.”


popular
Attention parents and kids! Here are 3 simple but scrumptious recipes to keep you busy all afternoon
David Beckham shared his dinner on social media and we really wish he hadn't
Mini Bella Boutique is running a huge online clearance sale as it sadly closes
Kim Kardashian says lockdown has made her realise she doesn't want more kids
Katy Perry reveals the gender of her first child with Orlando Bloom
How to potty train your toddler in three days, according to the experts
Due in 2020? These baby girl names are sure to be popular in the coming months
You may also like
1 year ago
Goldie Hawn and Kate Hudson's story proves that grannies can be a nuisance during labour
2 years ago
Kurt Russell's tribute to Goldie Hawn at their star ceremony was wonderful
3 weeks ago
Matt Lucas 'chuffed to bits' as he is announced as new host of Great British Bake Off
3 weeks ago
Coronation Street reveals more details about Norris Cole's return
3 weeks ago
No plans to close schools over coronavirus concerns - Department of Education
3 weeks ago
Cristiano comes face to face with Will on tonight's Fair City
Next Page