As of yet (apart from school-related matters) I am a firm believer in enforcing a rule of as little screen time as possible with my own two children.

My iPad (which is from 2013) lives in a drawer and was last charged in 2018, when we were flying off somewhere and I charged it, brought it – only for it never to even be switched on for the entire trip. I have a phone, of course, but when we are at home in the afternoons, this lives on a shelf in the hallway, where I can hear it if it rings or a message pops in, but where it is out of sight and not tempting me to scroll through social media when life with my kids is happening right in front of me.

We have a TV, of course, and love nothing more than to cuddle up for movie nights on the weekends, or watch funny Youtube videos or cartoons on a Saturday or Sunday morning, but during the week, there is no TV in the morning, and only sporadically does it come on in the afternoons and evenings too.

I know that there will come a day when screens will play a bigger part in my children's lives (they are now 10 and six), but as of now, I limit it as much as possible, feeling like there are far more fun and important things we could be spending our time together on.

They use screens in school, and my 10-year-old now and again has projects where she needs to work on my laptop, and that is great – I embrace all the good things about technology – I am just a very firm believer in that children growing up today will have so much exposure to technology and gadgets anyway, they are more in need of someone who will limit this for them than someone who will encourage them to get obsessed with from an early age. 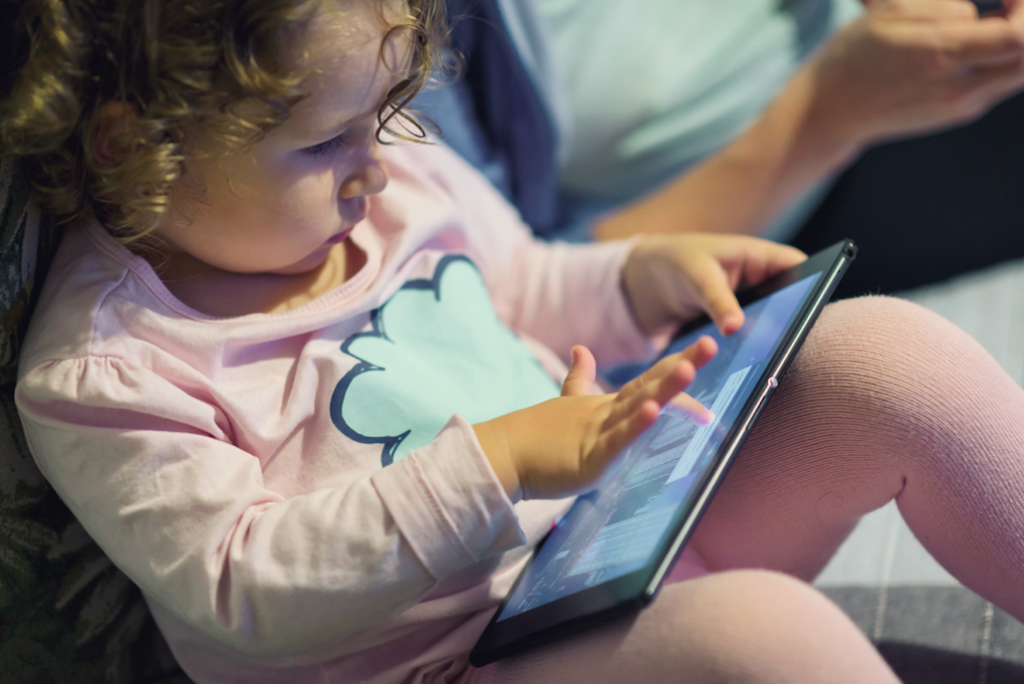 And I am not taking my concerns in regards to technology from thin air, there have been plenty of studies to back up how our collective addiction to screens is harming our health, sleep, eating habits, relationships and cognitive development – to name a few.

In a brand new study released by the French Public Health authority, researchers warn that allowing children to watch screens in the morning has lead to “a huge increase in language, behavioural, cognitive and social difficulties.”

The study, by the University of Rennes, looked children aged between three and six and found that the risk of speech and learning difficulties was three times higher for children who were watching screens in the morning rather than engaging in conversations with their parents and/or siblings. And this risk jumped to an alarming six times higher if children watched screens, and then did not talk to their parents about what it was they had watched.

The children were also more likely to become agitated from watching televisions, tablets or mobiles in the morning, and tended to remain disturbed for the rest of the day. Even more worryingly, passive screen watching can also make children more prone to hitting or scratching other children at school.

Speaking to The Telegraph about the study, child psychiatrist Lise Barthélemy, said: “Screens in the morning make them over-excited for the entire day. I deal a lot with agitated children showing disturbed behaviour.”

Dr Bathélemy explained exposure to screens as soon as children get up leads to “a huge increase in language, behavioural, cognitive and social difficulties”.

While Michel Desmurget, a neuroscientist who helped conduct the study, described passive screen watching by young children as “a major public health problem”.

“We already know that exposure to screens, which is now reaching stratospheric levels, is conducive to language difficulties, but this study is the first to reveal the impact in the morning. Face-to-face interaction over breakfast is essential.”

French health service guidelines advise parents not to allow children under three to watch screens, in line with a World Health Organization recommendation that under-threes should not watch TV or sit playing games on a tablet.

popular
Due next month? Here are 3 things to note about May babies
Mum admits she hates playing with her daughter, and we can relate.
Conor McGregor just told his little boy to punch another child in the mouth
The royals have just revealed a never-seen-before family photo – and it's adorable
Rachel Riley announces pregnancy in true Countdown style
Ashley Cain and Safiyya Vorajee describe final days with baby girl as "torture"
WATCH: Beauty ace Caroline Hirons teaches facial massage for supermodel skin
You may also like
22 hours ago
1 in 5 of women with heavy periods will have an underlying bleeding disorder
1 day ago
Survey finds 79% of workplaces do not have adequate employee fertility supports in place
3 days ago
New Gynaecology unit at Rotunda Hospital to provide increased access to vital services
4 days ago
Due this month? Science says April babies have TWO major advantages
6 days ago
Study reveals women are more likely to suffer from chronic pain than men
1 week ago
Síle Seoige's new documentary about miscarriage in Ireland airs tomorrow night
Next Page