'Scared to sleep...' Sarah Payne's siblings are still haunted by her murder

More than a decade and a half after her brutal murder, Sarah Payne's three siblings have spoken of how her death impacted on them.

Sarah was eight-years-old when she was murdered by paedophile Roy Whiting on July 1, 2000.

Now a new Channel 5 documentary sees her immediate family speak publicly for the first time of her tragic death.

Luke was just 12 when he was out with his brother, Lee, and sisters Charlotte, as well as little Sarah.

He describes in the documentary how Sarah ran ahead of them and dipped through a gap leading to a road on the edge of a field in Kingston Gorse, West Sussex.

She was never seen alive again.

Sarah had been snatched by Whiting, who is currently serving life imprisonment for her murder; he smiled and waved at her siblings as he drove away in his van with his young victim in the back.

Luke is understandably deeply traumatised by his harrowing experiences.

"I'm scared to sleep half the time so I work myself solid until I pretty much drop," he tells Channel 5, adding "Because it's fears of what's there when I close my eyes.

He goes on to say: "I always think about what she'd be like now, I see her friends about - some of them have got kids, others are working, one just got married - I always wonder what she would be doing." 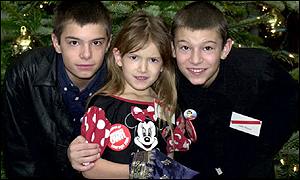 END_OF_DOCUMENT_TOKEN_TO_BE_REPLACED

Sarah's father, Michael, died in 2014, but the rest of her immediate family - including her mother, Sara - take part in the documentary.

During the same screening, eldest brother Lee admits: "When it comes to feeling guilt about the situation, I did for a few years beat myself up… that if I ran faster… I might have caught up with her."

And her sister, Charlotte, who was just five at the time of Sarah's disappearance and death, says she has often asked: "Why was it her and not me?"

Sarah's body was found two weeks after the day that Whiting took her. He is not eligible for parole until 2051.


popular
A mini heatwave could be coming our way in September
Vogue Williams slams man who refused to swap seats with her on plane
Mum issues warning to parents over frightening Cocomelon video
Toddler tries running away from home – because Cocomelon was turned off
Gilmore Girls star Alexis Bledel splits from husband of 8 years
Inside Prince William and Kate's beautiful new home in Windsor
Mum charged with murder after allegedly leaving baby in hot car
You may also like
5 hours ago
If your kids are 'too busy' it could cause some big problems later on in life
7 hours ago
Crown Paints advert receives 200 complaints over 'misogyny' and 'everyday sexism'
8 hours ago
Mum charged with murder after allegedly leaving baby in hot car
8 hours ago
Adam Collard allegedly attacked on night out with Paige Thorne
11 hours ago
Woman welcomes baby boy after artificially inseminating herself with €30 at-home kit
12 hours ago
Written in the stars -What does your zodiac sign say about your parenting?
Next Page