Cases are only continuing to rise.

650 primary school teachers have tested positive for Covid-19 in the last two weeks, according to the Irish National Teachers Organisation (INTO).

General secretary of the group, John Boyle, told Newstalk today that over 600 teachers had contracted the virus over the last two weeks, leading to a severe shortage of teachers as many are forced to miss work.

Boyle added that he believes schools have been "abandoned" by the government and teachers left "to protect themselves and their unmasked, unvaccinated pupils from the impact of the highest wave of infection in their schools since the pandemic began."

He said that the group were considering further ventilation methods and C02 monitors, but that ultimately the government needs to intervene lest the situation become dire.

“We are looking for solutions, but they have to come from the Department of Education and public health who have abandoned schools," he said.

Schools reopened fully in April of this year, after remaining closed for some months due to wide spread of the virus. Cases have only continued to rise in recent weeks, and the government have already reduced the hours of nightclubs and late bars.

Boyle said that the group is asking the Department of Education to "look at mask wearing" for primary school students too. Young children in countries like Italy and France have already been wearing masks to school since they reopened. 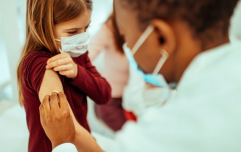 END_OF_DOCUMENT_TOKEN_TO_BE_REPLACED

Boyle also said that many outbreaks of the virus in Ireland's schools are not being reported.

“I’m not saying that the figures are out of sync, but to say there are only 12 outbreaks [in schools] is not true," he said. "It is not being reported."

“They can’t know because they haven’t been doing any checking.”

The government is now considering further Covid measures ahead of the Christmas period. Taoiseach Micheál Martin said last week that he couldn't rule out further restrictions in the coming weeks.


popular
No definitive plans to lift remaining maternity restrictions in Irish hospitals
Crystal Swing's Dervla calls for more supports for children with autism
Expert says Cocomelon acts "as a drug" to kids' brains
Here’s how your kids can learn about the importance of Irish nature in a fun and interactive way
Oliver Sears opens up about how his family survived during the Holocaust
Whether you’ve got a baby on the way or have an army of your own, the Lidl Big Baby Event is here to help
Janet Jackson addresses decades-long rumour she secretly gave birth in the 80s
You may also like
15 hours ago
Irish people expecting babies via surrogate in Ukraine urge to contact Dept. of Foreign Affairs
1 day ago
Teenage pregnancies almost don't happen in Ireland anymore – and here is why
1 day ago
Texas brothers allegedly beat stepfather to death for sexually abusing their younger sister
2 days ago
18-month-old toddler dies after being hit by car in driveway of his home
2 days ago
Activist takes abortion pill on live TV to show how "safe" and "common" it is
2 days ago
"If my wife lets herself go after childbirth, I'll leave" US podcast host reveals
Next Page