The bouncy castle was lifted several feet into the air.

An 8-year-old girl has died after a bouncy castle accident in Spain.

The young girl was playing on the bouncy castle when a gust of wind lifted it into the air.

The incident took place at a fairground in Mislata on January 4th.

Emergency services rushed to the scene but sadly couldn't save the 8-year-old.

The children fell several feet when the bouncy castle was lifted up into the air.

The young girl suffered severe head injuries when she hit the ground.

Another girl is in critical condition in hospital. She is only 4-years-old. 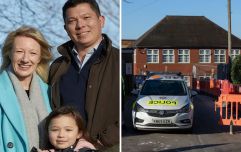 Emma Pattison made distressed call to sister before murder-suicide

END_OF_DOCUMENT_TOKEN_TO_BE_REPLACED

Several other children were hurt, but their injuries are not life-threatening.

Police in Spain have launched an official investigation into the cause of the accident.

A spokesperson for the firefighters said, "We checked the structure to make sure there were no other minors beneath it.

He also extended his deepest sympathies to the families affected by the tragedy.

"There are no words of comfort, a real drama. A very sad day for Mislata.

"All the support and encouragement to the families," he shared.

We are keeping the young girl's family in our thoughts at this unthinkable time, as well as all those affected by this tragedy.

popular
Emma Pattison made distressed call to sister before murder-suicide
Vogue Williams opens up about her divorce from Brian McFadden
Paris Hilton's husband's 9-year-old child wrote a letter begging him to be in her life
RTÉ Operation Transformation star starts fertility treatment
4 ways to fix hard slime with ingredients you probably already have at home
Jessica Biel faces backlash after admitting to teaching her toddler sex ed
Police do not believe Nicola Bulley was a victim of a crime
You may also like
1 day ago
Siblings kidnapped in March 2022 have been found alive
1 day ago
Emma Pattison: Tributes paid following death of head teacher and her family
1 week ago
Dad asks public to forgive his wife after she killed their three children
1 week ago
16-year-old boy appears in court following murder of teenage girl
1 week ago
What is chroming? Mum issues warning after daughter dies from dangerous trend
1 week ago
10-year-old boy stable after being struck by lightning
Next Page