A powerful illustration of people power.

Supporters of the Homeless movement, Home Sweet Home (HSH), this afternoon linked arms in solidarity with the residents who have taken over occupation of the Dublin building.

They have defied a court order which today refused an application for an extended stay for the residents in Apollo house.

The Irish Times reports that Mr Justice Paul Gilligan refused the stay on the eviction order granted last December which came into force today at 12 pm.

He said the court could not "stand idly by and allow the trespass to continue."

He said he did have sympathy for the aims of the HSH group, he also said he had to "apply the law in respect of private property" 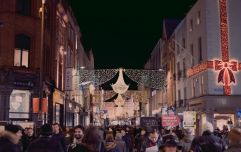 Christmas lights will be turned off early every night this year

END_OF_DOCUMENT_TOKEN_TO_BE_REPLACED

This evening at the building in Dublin, hundreds gathered to link arms to show their support for the occupants.

A spokesperson for the movement said the remaining occupants of the building would not be leaving and blamed the Government and Dublin City Council for reneging on their promises to organise suitable alternative accommodation for those involved.

popular
Kelly Clarkson admitted she spanks her children if they misbehave
Today FM's Paula MacSweeney welcomes baby boy
Hilary Swank, 48, reveals she is pregnant with twins
Kelly Osbourne responds to backlash over deciding not to breastfeed
It looks like Ireland could get a white Christmas this December
Lush to open its biggest Irish store this winter
Rebekah Vardy asks Coleen Rooney to give legal fees to charity
You may also like
2 weeks ago
Teenager hospitalised following alleged assault in Dublin
4 weeks ago
Bono bumps into girl on her way to the Debs as he visits old home
1 month ago
10-month-old baby abandoned on road after Dublin car theft
1 month ago
Sarah Jessica Parker offers to help out at busy Dublin restaurant
2 months ago
Gardaí seek public's help in finding missing girl (13)
2 months ago
The hottest temperature in Ireland in the 21st century has been recorded
Next Page