"The good fortune is not lost on me or my family."

Michelle Williams has revealed that she is pregnant and expecting her third baby.

The actress welcomed son Hart with husband Thomas Kail back in 2020, and Williams is also mum to Matilda, 16, whom she shares with her late husband, actor Heath Ledger, who passed away in 2008. 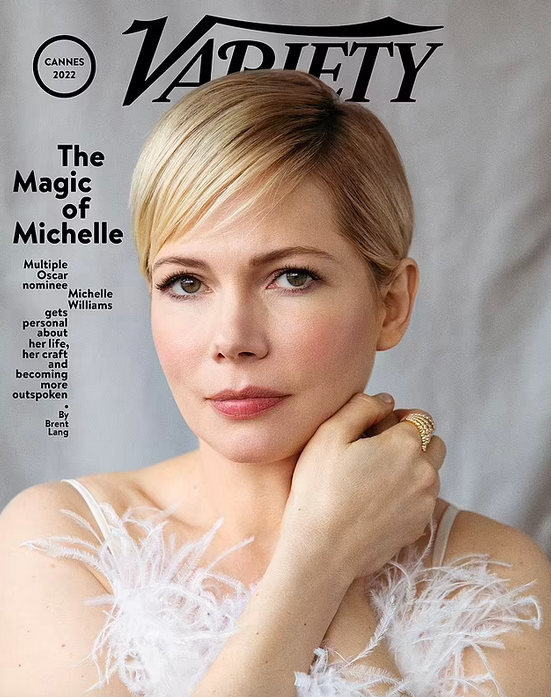 Speaking to Variety yesterday, the 41-year-old, who cradles her growing baby bump in the accompanying photos for the cover story, said:

"It's totally joyous. As the years go on, you sort of wonder what they might hold for you or not hold for you," The Greatest Showman actress revealed.

"It's exciting to discover that something you want again and again, is available one more time. That good fortune is not lost on me or my family."

Williams also revealed what it was like becoming a mum for the second time during the pandemic and lockdowns:

"It was a reminder that life goes on. The world we brought a baby into is not the world we thought we were bringing a baby into, but the baby is ignorant of that. He experiences the unmitigated joy of discovery and the happiness of a loving home."

"There's nothing that makes you committed to a better world than raising a great kid. It's the ultimate creative act," added Williams. "The most ecstatic moments of life and art are the transcendent ones. Having children is like that. You combine your DNA with someone else to create a new life."

The mum-of-two also said she plans to take a break from acting during her pregnancy:

"I wondered if I could work while I was pregnant, but I'm too tired."

Williams and Kail, who is a director, secretly wed in March 2020, after getting engaged just six month previous.

The pair had met while working on Fosse/Verdon, where Kail served as the director and Willians starred in the mini series.


popular
Multiple people killed in Denmark shopping mall shooting
I tried 'slow parenting' for a year and I'm never going back
The finale of The Babymakers had us all in bits last night
Say it isn't so: Workin’ Moms’ to end with Season 7
Congrats! Fiona and Eoghan from TV3's The Babymakers welcome twin girls
Opinion: The obsession with routines and sleep training for babies is weird – and stressful
Expert says Cocomelon acts "as a drug" to kids' brains
You may also like
1 day ago
Supermarkets add security tags to baby formula as cost of living crisis deepens
2 days ago
Cost of living: Parents admit to going without meals to feed children
5 days ago
Free contraception to be rolled out for women aged 17-25
5 days ago
19-year-old in critical condition after severe car accident in Cork
5 days ago
Children wearing wrong-sized shoes and pyjamas in daytime as parents cut costs
1 week ago
Abortions at record high – with cost of living and job insecurity partly to blame
Next Page