The couple has been dating for just over a year.

Adele has moved in with her boyfriend Rich Paul.

The singer, who rarely speaks about her relationship, posted photos of her and her partner on Instagram.

In the snap, the couple is holding the keys to their new house.

The couple paid a whopping $58million for the stunning mansion, but the asking price was $110million.

According to reports, their new home is in Beverly Hills.

The house used to belong to actor Sylvester Stallone.

The two-story mansion also has a beautiful wraparound balcony, a terrace, and an art studio. 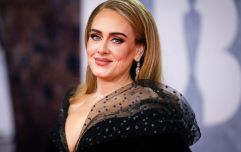 Adele responds to those engagement rumours

END_OF_DOCUMENT_TOKEN_TO_BE_REPLACED

As well as all of that, it has an infinity pool, a spa, a fully-equipped gym, a cinema, and an eight-car garage.

The couple's move comes after they were hit with engagement rumours.

Adele was spotted wearing a sparkling diamond on her ring finger at the Brits earlier this year.

During an appearance on the Graham Norton Show, the I Drink Wine singer responded to the rumours.

She told host Graham Norton, "If I was, would I ever tell anyone if I was or wasn’t?”

The Grammy winner added that she is hoping to have more children in the future.

She is already a mum to 9-year-old son Angelo, whom she shares with ex-husband Simon Konecki.


popular
Irish teachers "can't even string a sentence together"
Mum horrified after finding a knife inside the box of a doll she was buying for her daughter
Young mum and her 3-year-old son pack their bags to travel the world
Laverne Cox makes history with the first ever Trans Barbie doll
Is your toddler waking too early? Do these 4 things
Vicky Phelan lends some support to Saoirse Ruane after surgery
80,000 more children aged six and seven are set to get free GP care this year
You may also like
3 months ago
Adele tearfully dedicates BRIT Award to "gracious" son Angelo and her ex-husband Simon
6 months ago
Adele gets honest about the anxiety that left her bed-bound after divorce
7 months ago
School Run News: Adele gets honest about why her marriage ended
2 years ago
Adele stepped out with a stunning new look in her birthday post
2 years ago
Adele shares gorgeous Christmas snap but the reaction to it is incredibly frustrating
3 years ago
Adele speaks about moving forward in emotional post to mark her 31st birthday
Next Page