"I need you most": Alexandra Burke finding pregnancy bittersweet without her mother

"She really misses her mum"

Alexandra Burke has opened up about missing her mother during her pregnancy.

Burke's mother had been suffering from kidney failure prior to her death. She also suffered from diabetes mellitus.

Burke is expecting her first child but is finding it bittersweet without her mum by her side.

She recently shared a photo of her and her mother on her mum's birthday.

She wrote, "Now more than ever I need you the most."

The mum-to-be added, "I’m still very lost without you. But I know you’re in a better place. I love you mummy, Happy heavenly birthday. You’re my world."

A source revealed to OK! that the West End star has been finding things difficult. 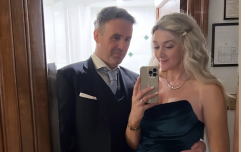 END_OF_DOCUMENT_TOKEN_TO_BE_REPLACED

There are so many momentous moments her mum is missing out on and there's no doubt it's breaking her heart.

"She’s an emotional girl and she’s finding it difficult.

"She and her mum were there for each other in every way, her mum was there for her every step of the way, so she’s really feeling it."

They added, "She really misses her mum."

They explained that it feels like she's grieving the loss of her mother all over again.

"It’s sad because the one person she wants is her mum. It brings the loss back," they added.

Luckily, Alexandra has been leaning on her friends, and of course, her partner Darren Randolph.

Alexandra and Darren revealed they were expecting their first child together on February 14th.

The singer is due to give birth later this year.

popular
Former Grey's Anatomy writer says she has "no excuse" for lying about cancer
The government has launched a new funding model for Irish childcare services
Sam Asghari opens up about Britney Spears amid concerns for her well being
Father took daughter to hospital three times before she died of Strep A
Toni Collette announces divorce from David Galafassi after almost 20 years of marriage
The release date for season 12 of Call The Midwife has been announced
Here's your chance to WIN a €500 toy voucher just in time for Christmas, with Petits Filous
You may also like
6 days ago
Expecting a baby in December? These are the top Christmas-inspired baby names
2 weeks ago
I'm embarrassed about the name I gave my baby girl
2 weeks ago
Mums are under too much pressure to look 'Instagram cute' during pregnancy
3 weeks ago
Expecting in December? These are the top Christmas-inspired baby names
1 month ago
'A beautiful miracle': Rebel Wilson welcomes her first child
1 month ago
My sister stole my baby name- should I still use it for my son?
Next Page