The mother of Archie Battersbee has begged doctors not to turn off his life support.

The High Court ruled that the 12-year-old is dead, but his family wants his treatment to continue.

According to The Mirror, his mother Hollie Dance said her son is still alive.

She has urged the court to reconsider their decision after they agreed to turn off the young boy's life support.

His mum told the publication, "His blood pressure went up, so we put on a deep-breathing meditation recording and put lavender oil under his nose and within 10 minutes his blood pressure dropped to normal levels.

“It’s a glimmer of hope. He’s in there and he’s going to wake up," she added.

The UK High Court ruled in favour of switching off the young boy's life support.

However, his family wants to appeal the decision. 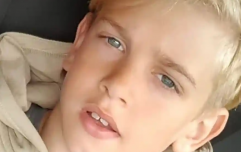 END_OF_DOCUMENT_TOKEN_TO_BE_REPLACED

They beleive he is still alive because his heart is beating. His mum also claims Archie held her hand the other week.

Earlier in the month, his mum said she was heartbroken after the court agreed with Archie's doctors.

"I am devastated and extremely disappointed by the judge’s ruling after weeks of fighting a legal battle when I wanted to be at my little boy’s bedside."

"I feel sickened that the hospital and the judge had failed to take the wishes of the family into consideration."

His mum said her son has not been given "enough time".

Doctors have stressed that there is nothing more they can do for the 12-year-old.

It is believed Archie was injured when he was taking part in a dangerous online challenge.

On April 7th, the 12-year-old was found with a ligature around his neck. He has not been conscious since then.


popular
Jacques O'Neill speaks out about Paige and Adam's relationship
Gardaí are appealing for assistance in tracing 17 year old missing since July
Olivia Newton-John has sadly died, aged 73
Musings: I think 'Lawnmower' parenting is damaging for children
This mum's post about dying to send her kids back to school is too funny
Ashling Murphy had so much more to give, says heartbroken parents
4-year-old girl killed in house explosion in London, police confirm
You may also like
6 days ago
Archie Battersbee's mum says she feels "let down" by justice system
1 week ago
Doctors will stop Archie Battersbee's life support treatment tomorrow
2 weeks ago
Archie Battersbee's life support should be switched off, judge rules
3 weeks ago
Doctors say there is no chance Archie Battersbee will survive
1 month ago
Mum "sickened" after judge gives doctors permission to switch off her son's life support
3 days ago
Everything we know about the revived Big Brother
Next Page