Are you putting YOUR children at risk of digital kidnapping?

A quick scroll through my Facebook feed confirms one thing: My friends have some really adorable children.

There is little Molly in her new dress sitting on Santa's lap. Oh, and look at how cute my friend's little twins are, grinning at the camera after singing at their school play!

I am guilty too, don't get me wrong. My Facebook and Instagram feed are choc-a-bloc with snaps of my own two little darlings, baking cookies, jumping through leaves and having fun on that trip to Spain earlier this autumn.

The thing is, though, the internet is a scary place for pictures of children to be seen. Even if your settings are set to all kinds of private.

That's what Danica Patterson from Dallas discovered when she suddenly was sent a screenshots of her daughter Bryleigh on Facebook — posted to a strange man’s profile. 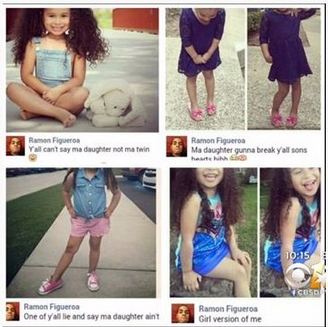 According to the man's Facebook profile, he claimed the four-year-old to be his own daughter, sharing images of her and details about the tot that made the hair stand up on Patterson's neck.

After the initial tip-off, the 23-year-old mum-of-one consulted a solicitor who specializes in social media, who agreed with Patterson that the image theft and claims made by the stranger falls under the umbrella of digital kidnapping. The problem? This whole concept is a legal “gray area” with few repercussions as there is technically no law prohibiting you from saying someone is related to you.

Patterson told a local news station: “It was my daughter! All over his page. It’s scary. That’s the only thing I can really say, it’s scary.”

END_OF_DOCUMENT_TOKEN_TO_BE_REPLACED

The only legal option for the concerned mother was to complain to Facebook, which she did straight away, but with little result to begin with. According to the social media giant, the man's profile met “community standards,” and there was little they could do further. “Facebook sees no problem with this man pretending this little girl is his," Patterson explained.

To their credit, a few days later Facebook updated their position on this, shared in a statement to News8:  “This type of content violates our standards. Once a parent or guardian reports it to us, we work quickly to remove it.”

As of now according to Patterson, her daughter's pictures have been taken down from the strangers page, but his profile remains active.

Of her digital mistake, she warns: "I thought my profile was set to ‘private,’ but I didn’t know posts can be public."

Are YOU posting pictures of your children online? Are you careful with security settings? Join the conversation with us on Twitter @Herfamilydotie


popular
Toddler dies after falling from balcony in New York
Rachel Stevens announces split from husband of 13 years
My teenage step daughter just told me she is pregnant, what do I do?
Multiple people killed in Denmark shopping mall shooting
I tried 'slow parenting' for a year and I'm never going back
The most natural thing in the world? You've got to be f***ing kidding me
Say it isn't so: Workin’ Moms’ to end with Season 7
You may also like
2 days ago
Supermarkets add security tags to baby formula as cost of living crisis deepens
2 days ago
Cost of living: Parents admit to going without meals to feed children
5 days ago
Free contraception to be rolled out for women aged 17-25
5 days ago
19-year-old in critical condition after severe car accident in Cork
6 days ago
Children wearing wrong-sized shoes and pyjamas in daytime as parents cut costs
1 week ago
Abortions at record high – with cost of living and job insecurity partly to blame
Next Page