Ashley Graham gets front tooth knocked out after toddler headbutts her

Ashley Graham has revealed she had to take an emergency trip to the dentist after cracking her front tooth.

The model, who is expecting twin boys with husband Justin Ervin, told fans her two-year-old son had head butted her, knocking the tooth out.

Sharing a selfie of her newly-botched smile, Ashely wrote: "Isaac head butted me and my tooth cracked off... Happy humpday!" 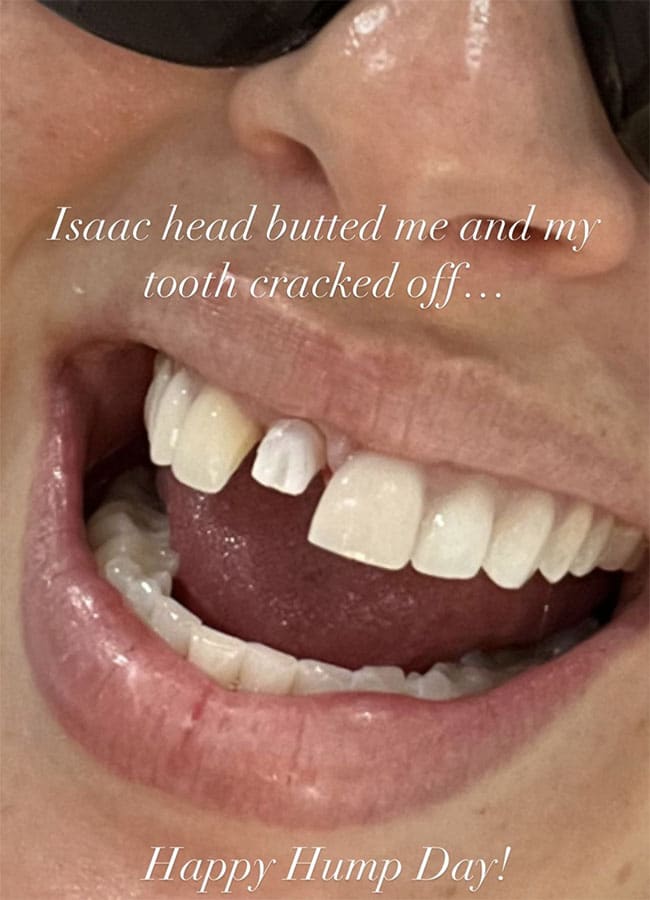 Thankfully, it looks like she likely had one of her veneers pop off - false porcelain teeth that cover a shaved-down tooth -  which isn't too hard to get reattached.

The 34-year-old saw the humorous side of things as she joked about the situation.

This isn't the first time she has had trouble with a front tooth, either.

Last year, after taking a bite out of a cookie that her mother had baked for her, Ashley also cracked one of her incisors.

In an Instagram video, she said: "Shout-out to Linda Graham for making the best oatmeal cookies in the world... and putting them in the freezer... and having your daughter break her tooth on them."

Replying to a comment on the video, she said: "It's a reoccurring problem."

In July, the model announced she was pregnant, a year-and-a-half after she welcomed her first child into the world.

Alongside a snap of Ashley cradling her baby bump, she reflected on her year and looked to the future.

"The past year has been full of tiny surprises, big griefs, familiar beginnings and new stories," she said. "I'm just beginning to process and celebrate what this next chapter means for us."


popular
"You're disgusting": Prince William roars at photographer who was 'stalking' his family
Michael Owen hilariously responds to Love Island's heart rate challenge
6 fun things to do in Dublin on your next family day out
Fashion expert tells mothers what to wear on school run to not look 'old and frumpy'
Family of Deborah James sadly announce that she has passed away
Mum gets mixed reaction to photo of her drinking beer while breastfeeding
Children wearing wrong-sized shoes and pyjamas in daytime as parents cut costs
You may also like
1 month ago
Kim Kardashian says she'll "hopefully" have one last wedding: "Fourth time’s a charm!"
2 months ago
Kourtney Kardashian says she’s ‘grateful’ her kids witness her and Travis Barker’s PDA
2 months ago
Stacey Solomon is "embarrassed" about having a swimming pool because it isn't relatable
2 months ago
Britney Spears on her pregnancy anxieties: "I'm so scared to make a mistake"
2 months ago
Kim Kardashian reveals she didn't speak to Kanye for 8 months after filing for divorce
2 months ago
Jennifer Lopez details the moment Ben Affleck proposed for a second time
Next Page