"He’s just a little boy. He didn’t think this was really serious.”

A pair of teenage boys have been arrested in Florida after allegedly planning a mass shooting at their school.

Thirteen-year-old Conner Pruett and 14-year-old Phillip Byrd were taken into custody at Harns Marsh Middle School in Lehigh Acres, Florida, after another student told a teacher they thought one of the boys had a gun in his bag.

The boy’s backpack was searched —  no weapon was found, but other disturbing materials were, including a map of the school with the locations of all of the cameras in the building marked.

Search warrants were issued for both teens’ homes, where authorities found a gun and several knives.

Authorities also learned that the teens had an interest in the Columbine massacre; a tragic school shooting that happened April 20, 1999, at Columbine High School in Littleton, Colorado, when two 12th-graders, Eric Harris and Dylan Klebold gunned down 12 of their fellow students and one teacher before turning their guns on themselves.

Pruett and Byrd were allegedly studying the attack and learning how to construct pipe bombs and how to buy firearms off the black market.

The teens were well known to police, and it's reported that officers have responded to calls at their homes in the past for disturbances a combined 80 times.

Two teenagers have been arrested after authorities said they plotted to commit a mass shooting at a Florida middle school. https://t.co/9uSwz9Nu28 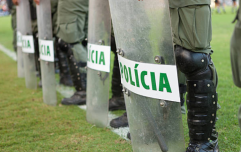 6 children and 4 adults killed in school shooting in Brazil

END_OF_DOCUMENT_TOKEN_TO_BE_REPLACED

At a news conference, Sheriff Carmine Marceno said: “This could’ve been the next Parkland massacre. We were seconds away from a Columbine here."

Phillip Byrd's mother, Carrie Tuller has spoken out to say her son is "innocent", insisting: "He’s just a little boy. He didn’t think this was really serious.”

She also said that she'll be "switching him out" of Hans Marsh Middle School.

The teens have been arrested and charged with conspiracy to commit a mass shooting. Both boys were ordered to be held at a juvenile facility for at least 21 days and are currently receiving a psychiatric evaluation.


popular
YouTuber 'Sarah's Day' is experiencing one pregnancy symptom in particular
"I'm broken": Dad pays tribute to his children, their mum and friend who were killed at sleepover
Take note: Here are the toys expected to top every child's wish-list this Christmas
Six tell-tale signs that your baby might need to burp
The only people obsessed with pets are the people who don't have children
20 cute baby names with equally adorable abbreviations
These Baby Names Inspired By Irish Mythology Are So Good We Want Them ALL
You may also like
2 years ago
Irish mums says her daughter's school received hoax school shooter messages
2 years ago
American parents are buying their children bullet proof backpacks
3 years ago
Sign of a worsening crisis as American schools begin installing 'Active Shooter' boxes
3 years ago
The heartbreaking reason why some mothers send their kids to school with doorstops
3 years ago
Armed officer at Florida school shooting 'never went inside' to intervene
3 years ago
Florida school shooter charged with 17 counts of murder
Next Page