Our babysitter fell asleep when she was minding our child- was she in the wrong?

A mum has called out her babysitter after she fell asleep on the job.

She explained that she was on a rare date night with her husband when the incident happened.

The woman and her husband checked the monitors in their house and they noticed she was lying on the sofa with her eyes closed.

The mum thought she was just closing her eyes because she had mentioned she was going to listen to an audiobook.

However, they noticed that when they texted her she didn't move.

They then knew she had fallen asleep.

In a TikTok video, the mum shared, "My husband and I usually don't leave to go on date nights until he [her son] is fully asleep."

But they had to leave him before he settled because they would have been late. 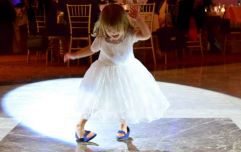 END_OF_DOCUMENT_TOKEN_TO_BE_REPLACED

Luckily, the babysitter got him to sleep shortly after they left the house.

The mum added, "She told me he was really easy, just [rocked him for] 15 minutes, and then he was asleep and was asleep the rest of the night."

After checking the security cameras and noticing she was asleep, the parents started to panic a little.

"Internally, I'm kind of starting to freak out," she confessed.

She wouldn't have had a major problem with this because she thought the baby's sound monitor was on.

However, the babysitter failed to switch it on.

Therefore she wouldn't hear the baby if he woke up, especially if she was fast asleep.

Do you think the mum is overreacting?

Or does she have a right to be bothered by the babysitter's actions?

popular
Babies born in February have some pretty cool advantages – no, really – it's true
11 of the best fun playgrounds in Dublin
'He's a changed man': Woman marries her 'high school bully'
'Vile' TikToker blasted for comparing disabled kids to vegetables
26 Amazing Irish Glamping Sites for Your Family Staycation
Entrepreneur schoolboy has made £1,000 from selling sweets
We have St. Brigid to thank for our new bank holiday, but who exactly was she?
You may also like
1 month ago
My deaf child is never invited to birthday parties and it breaks my heart
1 month ago
I found my friend's husband on a dating app- should I tell her?
1 month ago
Should I let my 6-year-old daughter dye her hair or is she too young?
1 month ago
Little girl heartbroken after only two people show up at her birthday for odd reason
3 months ago
My baby's nursery threw out one of their shoes- should they pay for a replacement?
3 months ago
I kicked my daughter's friend out of her birthday party- was I wrong?
Next Page