We're in for it today.

While the weather for the weekend is looking absolutely dreadful, today is not going to be pleasant either, with rain battering down on the country.

While it will be light at first, it will turn heavy later with Met Éireann saying that the wind is going to become forceful as the day goes on.

Cloudy with patchy rain and drizzle today, becoming persistent from the west and turning heavy later. Winds will be moderate to fresh southeasterly and will increase strong as the day goes on. Highest temperatures 7 to 12 degrees. pic.twitter.com/H1YAI2ht4i

The weather forecaster said: "Today will be cloudy with patchy rain and drizzle becoming persistent from the west and turning heavy later. Winds will be moderate to fresh southeasterly and will increase strong as the day goes on. Temperatures this afternoon will range from 7 degrees in the north to 12 degrees in southern coastal counties." 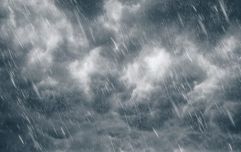 END_OF_DOCUMENT_TOKEN_TO_BE_REPLACED

Meanwhile, "tonight heavy rain will become widespread and strong southeasterly winds will reach gale force at the coasts. Temperatures will fall to between 4 and 6 degrees."

And you might as well not leave the house tomorrow: "Saturday, will be wet with local spot flooding as heavy rain continues through the day. Temperatures will range between 9 degrees in in the north and 13 degrees in the south. Strong southeast winds in the morning will become strong west to northwest winds in the afternoon, with the potential for damaging gusts in parts of the north later."


popular
Brides-to-be! The €50 Zara dress that's perfect for day two of a summer wedding
I'll be tired in the morning, but as a mum I stay up late to get some time to myself
The floral River Island dress that will instantly update your wardrobe for spring
Holly Willoughby just wore the cutest €40 dress from Marks and Spencer
I've hit the point where I'd rather travel for my child's birthday than organise a party
Parents build two tiny homes on their property for their teenagers to live in
The elegant and stylish €22 Penneys dress you won't want to miss out on
You may also like
4 days ago
Met Éireann have issued an orange weather warning for two counties
5 days ago
Met Éireann issues rainfall warning for all of Ireland
6 days ago
Met Éireann have issued a weather advisory for all of Ireland ahead of Storm Dennis
6 days ago
According to Met Eireann, the weekend weather forecast is looking pretty bad
1 week ago
A new Status Yellow snow/ice warning has been issued for 11 counties
1 week ago
Met Eireann has extended the orange and yellow warnings for the whole country
Next Page