Brad Pitt's response to the drama over his reunion with Jennifer Aniston is interesting, to say the least

Brad Pitt's response to the interest in his reunion with Jennifer Aniston is very, shall we say... very Brad.

The internet went into complete meltdown when photos emerged of the pair chatting and laughing at the SAG awards last weekend and then came the money shot where Jen walked away from Brad while he appeared to be mid-sentence, clutching her arm as if asking her to come back.

We'll never know exactly what they did say but you know, a picture tells a thousand words and all that jazz.

Anyway, Brad was back on the red carper circuit at the Santa Barbara International Film Festival this week and of course, reporters were keen to chat about that moment.

Asking him what he thought about the reaction to the photos, the memes that followed and the general hysteria surrounding the former couple, Brad was having none of it. 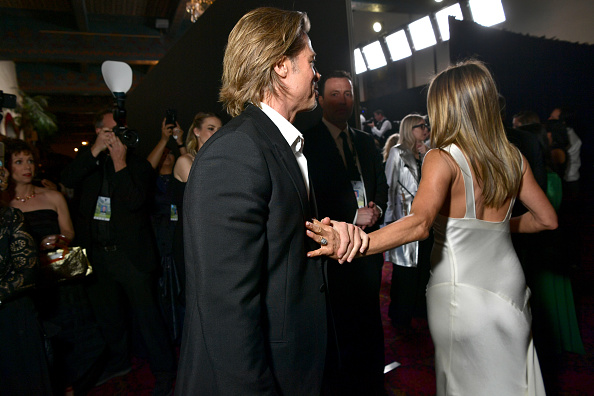 His response to Entertainment Tonight gave nothing away and basically denied being aware of the whole situation. Right, so. 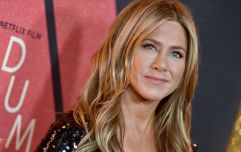 "You have no clue": Jennifer Aniston hits out at claims she chose career over having children

END_OF_DOCUMENT_TOKEN_TO_BE_REPLACED

Before their encounter was caught on camera and fans the world over freaked out, the biggest celebrity moment of 2020 so far, Jennifer was also asked what she thought of the fact that people were still obsessed with their relationship.

Also chatting to Entertainment Tonight, but before the SAG Awards began, she said it was "hysterical" but acknowledged that people were interested at least, posing the question "what else are they going to talk about?"

If you thought you were going to get some deep insight into how the couple feel about each other now, you're wrong but of course, that won't stop people debating why they should/shouldn't get back together, even if they have absolutely no interest in doing so.

popular
It looks like Ireland could get a white Christmas this December
Today FM's Paula MacSweeney welcomes baby boy
Has Molly Mae Hague accidentally revealed her baby's gender?
Here are the baby name trends set to dominate 2023
These baby girl names were used only five times last year
Inbetweeners co-stars Joe Thomas and Hannah Tointon welcome their first child
Kelly Osbourne responds to backlash over deciding not to breastfeed
You may also like
11 months ago
Jennifer Aniston's baby photo looks exactly like her on screen daughter Emma
11 months ago
Jennifer Aniston pays tribute to James Michael Tyler
1 year ago
"The grew close again" – Jennifer Aniston and David Schwimmer are apparently dating in real life
1 year ago
WATCH: Here's the first look at The Morning Show season two
1 year ago
Jennifer Aniston says baby news at Friends reunion "never happened"
1 year ago
Another 'disturbing' David Letterman interview has surfaced, this one with Jennifer Aniston
Next Page