Is she...? Britney Spears sparks pregnancy rumours with image of pregnant belly

Britney Spears sent rumour mils l into overdrive over the weekend as she shared a video of a pregnant stomach, causing over-excited fans and followers to speculate if the singer could be expecting baby number three.

Britney, who mysteriously deleted her Instagram account for a couple of days last week with no word or warning, just reappeared on the social media site again Friday and after a couple of wholesome selfies posted to her feed, was also quick to get tongues wagging after posting a cryptic clip to her stories which showed a heavily pregnant stomach. 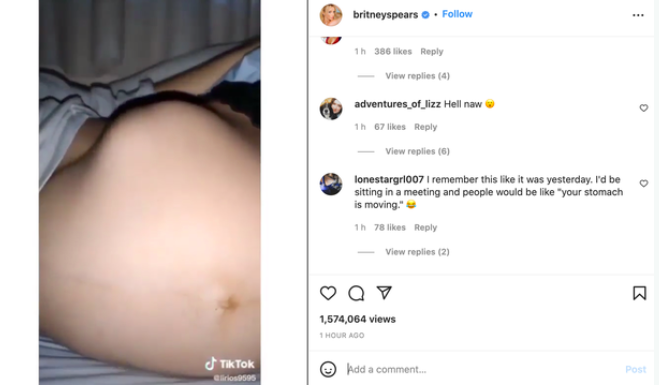 The 40-year-old, who has 39.9 million followers on Instagram, posted the cryptic video alongside the caption 'Mommy … get me out of here!!!!!!' without any further explanation, causing a wild frenzy of speculations that she was dropping hints about being pregnant herself.

One person commented: "I thought that was baby bump we were seeing. So happy for you."

END_OF_DOCUMENT_TOKEN_TO_BE_REPLACED

Another one questioned: “Got something to tell us?”

And a third one wrote: “GIRL thought u were pregnant!” – while another follower typed: “I think she's been subtly hinting she is.”

Nothing has been confirmed or denied by Britney herself, but the singer, who got engaged to her longtime boyfriend Sam Asghari last year, recently shared the heartbreaking details that she had been forced to use contraceptives for 13 years while under a court-ordered conservatorship that gave control of her personal and financial life to her father.


popular
Expert says Cocomelon acts "as a drug" to kids' brains
"You're disgusting": Prince William roars at photographer who was 'stalking' his family
6 fun things to do in Dublin on your next family day out
Mum who helped deliver best friend's baby finds out her husband is the dad
"It's a competition" – one mum rants about teachers' presents and I agree
This is what new parents in Ireland think is the hardest part
The 'Ice Cream' is being called a 'must-try' sex position - but there's one flaw
You may also like
1 day ago
19-year-old in critical condition after severe car accident in Cork
2 days ago
Children wearing wrong-sized shoes and pyjamas in daytime as parents cut costs
4 days ago
Abortions at record high – with cost of living and job insecurity partly to blame
5 days ago
Irish Cancer Society launches campaign for deferred maternity leave for cancer patients
5 days ago
Gardaí investigating serious shooting incident in Dublin
6 days ago
Robb Elementary school to be demolished in the wake of recent shooting
Next Page