Brooklyn Beckham and Phoebe Torrance are said to be dating.

After splitting from Hana Cross earlier this year, the photographer is thought to have become close to actress Phoebe.

According to reports, they were spotted at a launch party for new London venue, the Wellington, last month where they appeared to be getting on very well.

The Mirror reports that Phoebe (25) and Brooklyn (20) were "glued to each other" on the night in question and it seems they've been seeing each other for a few months.

It has been pointed out that there's a likeness between Phoebe and Brooklyn Beckham's mother Victoria.

Is it fast enough so we can fly away #35mm

Phoebe has previously appeared in horror movie Mandy the Doll and Six Rounds, a drama set in London but before her career took off, she apparently had a short stint as a Victoria Beckham lookalike.

A source told The Sun:

"Brooklyn and Phoebe move in the same social circuit, and have known of one another for quite a while.

She is a beautiful girl, and very talented - it’s no wonder Brooklyn took a shine to her. Bizarrely though, from a certain angle she does look terrifyingly like his mother, Victoria". 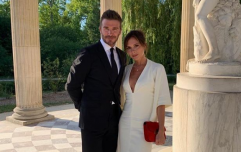 Victoria Beckham shares how she makes her marriage work with David

END_OF_DOCUMENT_TOKEN_TO_BE_REPLACED

Brooklyn is thought to have started dating model Hana Cross in December 2018 with the pair splitting back in August, sources claimed a series of arguments caused the relationship to deteriorate.

Phoebe is the daughter of former professional golfer Sam Torrance and although she and Brooklyn are believed to be getting on very well, there's no official confirmation as of yet.


popular
Ronan and Storm Keating have welcomed their second baby – and her name is the cutest
Recreate afternoon tea at home with these delicious Mini Yogurt Scones
"I want to ask you, not to school at home" – a teacher's plea to parents struggling to home-school goes viral
Holly Willoughby had the best comeback for Piers Morgan after he commented on her outfit
The O'Brien Press just launched a competition where YOUR child could get to design the cover of an actual book
'Love wins': Bindi Irwin shares first photo from her wedding to Chandler Powell
CJ Fallon and Edco now providing free access to their books until end of term
You may also like
6 months ago
Victoria Beckham swears by this 90 second beauty trick every morning
8 months ago
Victoria Beckham on why she didn't take part in the Spice Girls reunion tour
8 months ago
20 years on: David and Victoria Beckham share ultimate throwback to mark their anniversary
9 months ago
7-year-old Harper Beckham named more 'socially powerful' than Meghan and Harry
9 months ago
Victoria Beckham and Meghan Markle have the exact same dress
10 months ago
Victoria Beckham has a €9 beauty secret you need to know about
Next Page