Channing Tatum and Jessie J have split for the second time

According to reports, Channing Tatum and Jessie J have split for the second time.

The celebrity couple first split back in January and reunited a month later but their most recent breakup is thought to be for good.

A source close to the pair said it was an amicable split and that "they cared enough" to give things a second go.

Speaking with People, the insider said:

"They cared enough about each other to try again but realized it was better to move on".

Their initial split was said to be down to difficulties with long-distance dating as the pair have work commitments in different countries. 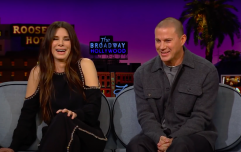 END_OF_DOCUMENT_TOKEN_TO_BE_REPLACED

With Jessie based in London and Channing spending a lot of time in Los Angeles to see his daughter Everly and adhere to work commitments, distance proved a problem and caused them to call time on their relationship for a period.

According to E! News, these "same issues" were still cropping up and although they love and care for each other,  it just wasn't to be.

Neither Channing or Jessie have made public comment on the split as of yet.

They first started dating in October 2018 and split a year later. They got back together in January 2020 and the split is thought to have happened recently.

Channing was previously married to actress Jenna Dewan, with whom he has a six-year-old daughter. Before starting a relationship with the Magic Mike actor,  Jessie J was romantically linked to Luke James and Kenny Hamilton.

popular
Love Actually star reveals incredibly emotional behind-the-scenes story
Shows like Bluey and Peppa Pig are actually bad for kids, expert warns
4 ways to fix hard slime with ingredients you probably already have at home
Is your child obsessed with a particular toy or topic? Turns out you should be encouraging it
What is chroming? Mum issues warning after daughter dies from dangerous trend
Remember Pugsly Addams? His real-life little sister is a HUGE star
Woman shocked after spotting her dead husband in promo video for restaurant
You may also like
1 year ago
"I was without a partner": Jenna Dewan gets honest about suffering from post-partum anxiety
2 years ago
Channing Tatum had the perfect reaction to Jenna Dewan's engagement news
3 years ago
Channing Tatum and Jessie J are dating again after splitting just a month ago
3 years ago
Ladies, Channing Tatum has joined a dating app and his bio is pure sauce
3 years ago
Channing Tatum and Jessie J split after one year of dating
3 years ago
Jessie J is 'hoping' she will still be able to get pregnant with adenomyosis
Next Page