Childcare fees to be reduced by up to €170 per month

Parents are spending around €750 on childcare per month.

Childcare costs are set to be cut by up to €170 in this year's Budget.

Coalition parties have agreed to cut childcare costs in a bid to help parents struggling to make ends meet.

There's no doubt the news will be welcomed by parents who have been hit by extreme childcare costs in recent years.

Minister Roderic O'Gorman has reportedly been pushing to reduce childcare fees in this year's budget.

According to The Independent, the Government will offer grants to creches in a bid to reduce their fees.

It is understood that the funding will come into effect in 2023.

The news comes after it was confirmed that Irish parents were paying around €750 per month for childcare.

Families in Dublin are paying nearly 60% more for childcare than families in other counties. 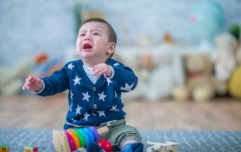 END_OF_DOCUMENT_TOKEN_TO_BE_REPLACED

Earlier this morning, it was revealed that all primary school pupils will be given free books from next September.

A Government source confirmed that all textbooks will be free for primary school children. The move has been welcomed by parents who have felt the financial strain during the back-to-school season.

Class sizes are also set to be reduced next year.

popular
Parents told to stop buying selection boxes for kids- here's why
People are realising what the red Christmas lights are actually for
Opinion: He may be a politician, but Leo Varadkar's personal life is none of our business
Expert says Cocomelon acts "as a drug" to kids' brains
Kelsey Parker: "People think I should be walking around wearing my black veil"
"Losing a baby is the ultimate loss, but to watch on over a video call is soul destroying"
4 ways to fix hard slime with ingredients you probably already have at home
You may also like
1 month ago
Nursery workers charged with child abuse after scaring kids with Halloween masks
5 months ago
Mum worried her daughter will be kicked out of daycare for crying too much
6 months ago
Family left shaken after toddler escapes from childcare centre
11 months ago
Mum furious at creche over upsetting letter from Santa
1 year ago
Should I complain to my son's nursery for discouraging him when he peed in a bush?
1 year ago
Daycare shut down after a toddler was put inside a dryer
Next Page