It's baaaack. Well, kind of.

There's no denying love is in the air this week - but now it's going to be on the air, too.

Yes, Christmas FM is making a return to the airwaves this week - but this time, as Kissmas FM.

The team behind the festive station - as well as the spook-tacular Halloween FM - confirmed the launch of the new pop-up station - which will "be bringing you the Magic of Love this Valentine's."

Oh, and it is officially back on the airwaves as of today.

That's right, Ireland’s Valentine’s station will be taking over all Christmas FM digital channels from February 11 until February 14. 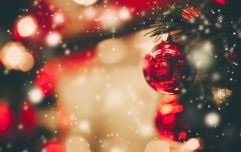 Better mark the calendars, Christmas FM is coming back to the airwaves on Thursday

END_OF_DOCUMENT_TOKEN_TO_BE_REPLACED

Kissmas FM will be playing non-stop love songs, letting listeners take time out to focus on the world’s greatest feeling and send out their messages of love.

The station launched at 7am today [February 11] and will be taking over all the Christmas FM digital channels.

That means you can listen to it at ChristmasFM.com, via the Christmas FM app, on TuneIn or by telling your smart speaker to ‘play Christmas FM Ireland’.


popular
Holly Willoughby just wore the cutest €40 dress from Marks and Spencer
Penneys is currently selling €11 loafers that look JUST like the famous Gucci ones
The Toothpaste Experiment is something that all parents should do with their kids
Kensington Palace shares a previously unseen photo of Princess Charlotte and it's just adorable
My child came home from school with a tin whistle and now I have to move
The flattering New Look skirt that has been reduced to €15 in the sale
Researchers now believe there is a link between consuming processed food in pregnancy and autism
You may also like
3 months ago
We finally have the date that Christmas FM will be back on the airwaves
5 months ago
Christmas FM have announced their charity partner for 2019
8 months ago
The people that bring you Christmas FM are running a radio camp for teens
1 year ago
'Tis the season! Here is when Christmas FM is coming back on the airwaves
1 year ago
Christmas FM have announced they will be supporting this children's charity
2 years ago
'Tis the season! Christmas FM is coming back on the airwaves soon
Next Page