She found her teenage daughter's body in her bedroom.

A mum has issued a warning after her daughter died from chroming deodorant.

Anne Ryan found her 16-year-old daughter's body in her bedroom in their New South Wales home.

She explained that there was a can of deodorant and a towel under her daughter Brooke's body.

It is believed her daughter was sniffing aerosols.

Her mother is sharing her story with the hope of warning parents about chroming.

But what exactly is it?

Chroming is a type of substance abuse that involves the inhalation of solvents like deodorant to get high.

Medical experts are increasingly concerned about the trend as it has grown in popularity with teens.

Brooke's mother told The Syndey Morning Herald that every day is a nightmare. 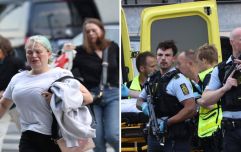 END_OF_DOCUMENT_TOKEN_TO_BE_REPLACED

“She was a beautiful girl with a heart of gold, who’s just so sorely missed."

She said her daughter would be "absolutely devastated to know the negative impact she’s had on so many people from her death."

“I wake up, I think of her, I go to sleep and think of her, and you wish, you wish [you could bring her back], but you just can’t,”

Brooke's mother believes she died from sudden sniffing death syndrome. This is a common side effect of using inhalants.

The problem with chroming is how easy it is for youths to access things like deodorant or other household items.

Parents have been warned that children are using things like shoe polish, dry shampoo, and even air freshener.

They have been advised to beware of the side effects of chroming.

Parents should look out for drowsiness, dizziness, confusion, or giddiness.

They should also note that it can cause vomiting, ringing in the ears, loss of inhibition as well as clumsiness.

People may also feel more relaxed or even more on edge.

Brooke's mother has urged all parents to be vigilant because she had no idea her daughter was inhaling aerosols.


popular
Multiple people killed in Denmark shopping mall shooting
I tried 'slow parenting' for a year and I'm never going back
The finale of The Babymakers had us all in bits last night
Congrats! Fiona and Eoghan from TV3's The Babymakers welcome twin girls
Say it isn't so: Workin’ Moms’ to end with Season 7
Expert says Cocomelon acts "as a drug" to kids' brains
Opinion: The obsession with routines and sleep training for babies is weird – and stressful
You may also like
1 week ago
Man reveals he spent an hour trying to save Irish girl (7) in Majorca
1 week ago
5-year-old boy tragically dies after being left in car in extreme heat
1 week ago
Baby boy tragically dies after being left in hot car for hours
2 weeks ago
Young boy found alive after being trapped in well for four days
2 weeks ago
Father charged with the murder of his three young children in Chicago
2 weeks ago
4-year-old girl dies after being left on school bus in extreme heat
Next Page