Nicky Byrne will 'absolutely' return to host Dancing With The Stars

Well, it's been confirmed but not by Nicky himself.

Instead, it was confirmed last night by Louis Walsh.

Yep, Westlife's long-time manager broke the news to the Irish Daily Mirror, saying that Nicky will "absolutely" reprise his role as presenter on Dancing With The Stars.

This will make many fans very happy as they loved Nicky hosting the competition; and after Westlife's reunion tour, the question of Nicky making a return was left unanswered.

It doesn't seem like Louis is too keen on making an appearance on the show, however as he said there was "no way" when asked. 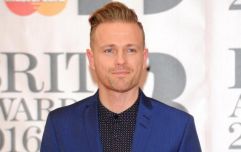 END_OF_DOCUMENT_TOKEN_TO_BE_REPLACED

Westlife just released their latest single My Blood on October 25 which was dedicated to their children. The band embarked on a reunion tour earlier this year which included two sold-out shows in Croke Park.

They also announced that they will take to Cork’s Pairc Ui Chaoimh for the first-ever time on 28 and 29 of August 2020.

popular
Bride asks for divorce day after wedding following groom's disrespectful cake stunt
Students given £500 after uni was unable to give them their degree certificates at graduation
Entrepreneur schoolboy has made £1,000 from selling sweets
Police believe they know what happened to missing dog walker Nicola Bulley
Parents believe CoComelon causes tantrums and speech delays in toddlers
Going on solo holidays is good for mothers, science says
Dad admits he hates his daughter's name so much it makes him uncomfortable
You may also like
3 months ago
Nicky Byrne pens moving birthday tribute to his daughter
5 months ago
Westlife's Nicky Byrne has quit Dancing With The Stars
6 months ago
Nicky Byrne and family evacuated due to wildfires in Portugal
3 years ago
Nicky Byrne pays a heartfelt tribute to his father on tenth anniversary
3 years ago
Nicky Byrne clears up comments made about Little Mix concerts
3 years ago
Nicky Byrne shares very emotional Instagram post as Westlife tour comes to an end
Next Page