It looks like Coronation Street is lining up a new love interest for Maria Connor.

In scenes set to air next week, sparks start to fly between Maria and doctor Ali Neeson as she vents to him about her non-existent love life.

But as the pair continue to chat at the Rovers Return, Ali suggests there's may be someone right under her nose - but will Maria take the hint? 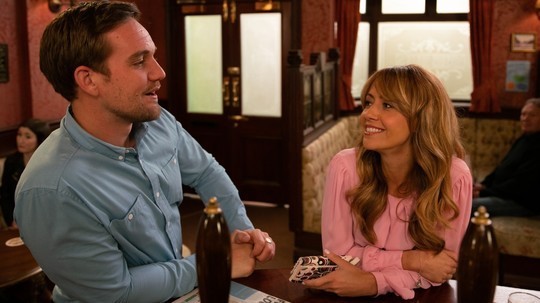 The news of the duo's romance was first revealed in early June, with What's On TV reporting Maria decides to take charge of her love life after a girly spa night with Gail Rodwell and Audrey Roberts.

Feeling old before her time, the mum-of-one decides to create an online dating profile in an effort to meet someone new.

However, things don't quite go to plan - with most of the unlucky-in-love hairdresser's dates turning out less-than-ideal.

“Maria goes on a series of hilarious and disastrous dates. She starts to think that her love life must be doomed, and she confides in Ali.

Coronation Street airs on Mondays, Wednesdays and Fridays at 7.30pm and 8.30pm on Virgin Media One.


popular
Study states we all need to stop using 'time out' to correct bad behaviour
20 Unisex Irish Baby Names That Are Absolutely Magical
Totally tropical baby names inspired by Hawaii
Fertility: These mums claim using a menstrual cup helped them get pregnant faster
3 seriously sensational (and simple) things you can do with a bar of Snickers
The reason why mums wake up when babies cry and dads stay asleep is interesting
Tommy Hilfiger lounge wear that makes staying at home seriously stylish
You may also like
1 month ago
Here’s the line-up for the first virtual edition of The Graham Norton Show tonight
2 months ago
RTE are set to broadcast an hour of 'school on TV' everyday from Monday
2 months ago
Joanne Froggatt has ruled out a season three of Liar
3 months ago
Liar's Joanne Froggatt teases what fans can expect from season two
3 months ago
ITV's new crime drama Honour will be the TV show that everyone is talking about this year
3 months ago
There's a Golden Girls-themed cruise setting sail next year and we're packing our bags already
Next Page