They didn't even say goodbye.

Scenes that aired on Wednesday night saw Liz - who was meant to be a witness at Jenny Connor's trial for running her over - make the last-minute decision to not turn up.

The police searched all around Weatherfield for Liz, but nobody had actually seen the former Rovers Return landlady - since she'd made her escape in the back of the Underworld van, which was driven by Paul and Gemma.

Imran realised Gemma was behind Liz's disappearance, after he told her Jenny's only hope was for Liz not to show up in court.

Then, Kirk said he had found Liz's necklace in the back of the van belonging to the factory - and Steve became really worried when his mum wouldn't answer her phone.

He even accused Gemma and Paul of kidnapping his mum, which they both denied. 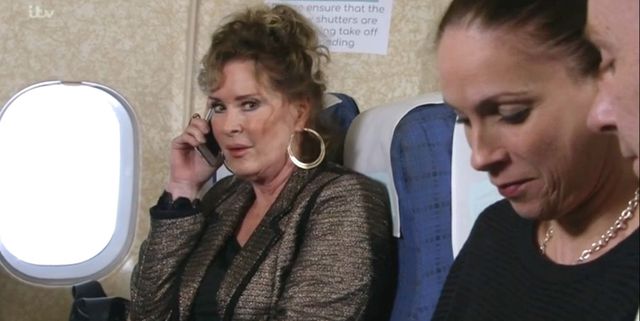 And when he went to accuse her of lying, Liz rang him to reveal where she really was: Terminal 2 at Manchester Airport, waiting for her flight.

"I couldn't do it. I couldn't could let Johnny and Jenny get sent down. Rita had a word. She made me see what a mess this all is. I couldn't see any other way to end it."

No further action will be taken, you can leave! #Jenny #Johnny #Corrie pic.twitter.com/7TjHWkrwBM

Since the prosecutors weren't able to find their witness, the judge deemed it unfair for the trial to take place - and told Jenny and Johnny they were free to go.

Viewers took to twitter after the episode, wondering if this was really the last they had seen of Liz.

Where's Liz going then!? Missed that. Going to see Andy is she!? #corrie how long for @itvcorrie!?

Hope Liz is coming back! The street wouldn’t be the same without her. And Rita! How can Rita not work in the cabin?! It’s just wrong! #corrie #ITVCorrie @itvcorrie

Bundle Liz in the back of the van and keep her away from court. That might help, or maybe not. LOL! #Corrie

I wasn't expecting this, I really thought Liz had been kidnapped! I wonder how long she'll be away for this time? #Corrie

What Liz? You going away and never invited me? #Corrie


popular
Breastfeeding: The amazing tip one midwife gave me on how to clear a clogged milk duct
This amazing hanging egg chair is coming into Aldi next week and go, go go (but safely)!
The Dalkey house where Matt Damon stayed during lockdown will be available to rent again soon
This Jersey Shore star wants to find her biological family after recently opening up about her adoption
These 5 Foods Could Increase Your Chances of Having Twins
Lidl's Baby Event is running this week and we want EVERYTHING
Pregnant pause: Pre-labour can last days, here's 9 tips to help you through
You may also like
1 month ago
Here’s the line-up for the first virtual edition of The Graham Norton Show tonight
2 months ago
Joanne Froggatt has ruled out a season three of Liar
3 months ago
Liar's Joanne Froggatt teases what fans can expect from season two
3 months ago
ITV's new crime drama Honour will be the TV show that everyone is talking about this year
3 months ago
There's a Golden Girls-themed cruise setting sail next year and we're packing our bags already
3 months ago
Corrie fans stunned as Katie McGlynn made a surprise appearance last night
Next Page