Sarah split from Gary Windass last month after she found out he had been lying to her about his loan shark troubles. She became even more furious when she found out who Rick really was - and just how close he had been to her son.

However, while Mikey North (who plays Gary) hinted that his character may try and win Sarah back, it soon looked like Coronation Street are lining up another love interest for Tina O'Brien's character.

The actress was spotted filming romantic scenes with Samuel Robertson - aka: Adam Barlow - in Manchester last month - and now she's spoken about how Adam "brings out a side of her personality that has been buried for a while." 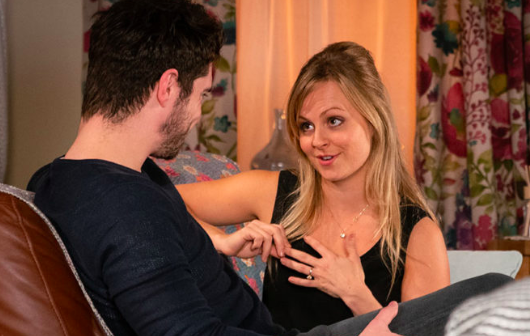 Talking to Metro.co.uk about how she was enjoying playing a "lighter side of Sarah," she explained:

"Sarah is definitely more cheeky and so much more flirty with Adam. It’s like she is young again and she is having that experience of feeling wanted.

"She’s even got a whole new wardrobe which is great. She is still young but she has had so much going on in her life she was feeling very downtrodden, Adam is making her feel desirable again."

However, their new relationship won't be without some difficulties - especially when the tensions between Gary and Adam resurface.

"I love the dynamic between Gary and Adam. There’s great friction and Sarah is in the middle of it all. Although she doesn’t want to be with Gary she still cares about him and doesn’t want to see him hurt.

"Adam is paying her attention and saying nice things to her and she can’t deny that he makes her happy even if that upsets Gary."


popular
#MomLife: 7 things I wish I done more of when my children were babies
Staycation: 10 bargain buys to turn your back garden into a chic hotel patio
Apparently, women feel 'phantom' baby kicks even years after pregnancy
Body found in search for missing five-year-old boy in Co. Mayo
Kate and William are pretty strict about school nights when it comes to George and Charlotte
Breastfeeding and pumping: 5 tips to make it easier for yourself
Stacey Solomon has the most brilliant hack for avoiding messy mealtimes
You may also like
1 month ago
Here’s the line-up for the first virtual edition of The Graham Norton Show tonight
2 months ago
RTE are set to broadcast an hour of 'school on TV' everyday from Monday
3 months ago
Joanne Froggatt has ruled out a season three of Liar
3 months ago
Liar's Joanne Froggatt teases what fans can expect from season two
3 months ago
ITV's new crime drama Honour will be the TV show that everyone is talking about this year
3 months ago
There's a Golden Girls-themed cruise setting sail next year and we're packing our bags already
Next Page