*WARNING - some readers may find the below image distressing*

“We still can’t believe that this happened, what kind of people does that?"

A 30-year-old man from Mexico who was viciously attacked alongside his husband in Portlaoise earlier this month has started a GoFundMe page to raise much-needed funds for the extensive damage caused to his face.

Collie Aquino Teixeira McQuillan and his husband were walking home when they were approached and attacked by a group of men who reportedly beat they with hurley sticks. 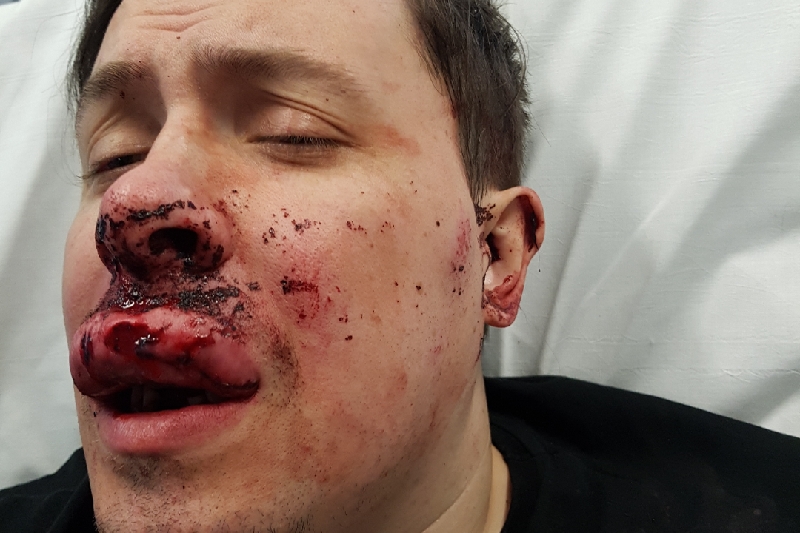 Collie Aquino Teixeira McQuillan was brutally beaten as he tried to protect his husband and now has an upper and lower broken jaw, a splintered bone in his jaw as well as two missing teeth and another two broken teeth according to Independent.ie.

The couple believe the attack was of a homophobic nature and now are raising much-needed funds for their medical bill which they believe will mount over €8,000. You can check out the GoFundMe page here.

“It never comes to your mind that this could happen to you or to someone close, till it does.

“My husband and I were savagely attacked by four men carrying hurls and pieces of wood, without a reason. He’s got the most severe injuries. His jaw is all fractured and lost four his front teeth. So with the physical pain, came the depression.”

“We still can’t believe that this happened, what kind of people does that? We just don’t understand.”

The Gardaí are currently investigating the incident.


popular
Frankie Essex reveals the names of her twin babies
6 fun things to do in Dublin on your next family day out
"No co-sleeping at all" – new safe sleeping guidelines for babies states
New dad called 'demanding' over list of guidelines to visit newborn son
Stacey Solomon shuts down cheating rumours as photos of Joe's stag-do emerge
Girl (7) who died in Majorca was originally from Donegal
Mum sets up 'Hygiene Nook' to keep baby safe and other parents love the idea
You may also like
2 days ago
Irish Cancer Society launches campaign for deferred maternity leave for cancer patients
3 days ago
Gardaí investigating serious shooting incident in Dublin
4 days ago
Robb Elementary school to be demolished in the wake of recent shooting
4 days ago
Over 200 children were seriously injured in childcare centres in Ireland last year
4 days ago
Breaking: 7-year-old Irish girl dies after tragic incident in Spanish hotel pool
1 week ago
Gardaí investigation underway following the discovery of two bodies today
Next Page