Dan Osborne has issued a public apology to his wife, Jacqueline Jossa and his family following a string of cheating allegations in recent weeks.

Dan Osborne, who initially rose to fame after a stint on The Only Way Is Essex, shared a lengthy statement on Instagram this evening.

Saying that he has "made mistakes", mistakes that almost cost him his family, the 28-year-old said that he has now realised the error of his ways.

"So after weeks, months, years of constant articles & rumours, some true, some very untrue. I want to publicly say, I know I have made mistakes, we all do as humans, but I've made some that have almost cost me my family.

"I have seriously learnt from these massively, so I want to publicly apologise to my beautiful wife and my family for the mistakes I've made.

"I am the luckiest man in the world to have what I have with Jacqueline and my three incredible children and I will spend the rest of my life being the best husband and dad that I can be.

"Jac, myself and our families are excited for the future, one filled with love and happiness together. We truly appreciate everyone that has supported us as a couple, we are ending this year stronger than ever."

Dan's apology comes after Jacqueline appeared on The Lorraine Kelly Show earlier today where she made reference to the allegations that have surfaced in recent weeks. 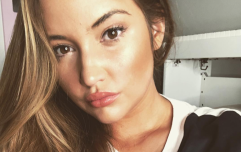 END_OF_DOCUMENT_TOKEN_TO_BE_REPLACED

Jacqueline was recently crowned winner of I'm A Celebrity...Get Me Out Of Here 2019 and during her time in the jungle, her fellow campmate Myles Stephenson is thought to have made reference to Dan cheating.

Myles previously dated Love Island star Gabby Allen and last year, rumours emerged that Dan and Gabby had become close after they both appeared as contestants on Celebrity Big Brother.

"The thing is, it’s really funny because we've been going it for two years - this isn’t new for me.

"It got brought up again because of Myles but at the same time, I was glad it made me think about it, I didn't have a choice but to think about it... but it helped me.

"I want to hit the restart button, it’s been two years of me giving him hell, he knows he’s done wrong, there's lots of stuff that’s not true that I can’t talk about for legal reasons, but we're OK".

popular
"My heart sank": Tubridy hit with backlash over Toy Show remark
Woman gives birth to baby boy and girl less than 12 months apart
Parents told to stop buying selection boxes for kids- here's why
"Losing a baby is the ultimate loss, but to watch on over a video call is soul destroying"
Third child dies from scarlet fever in UK- here are the symptoms to look out for
Conjoined twins return to Ireland after successful surgery
Having an Elf on the Shelf can actually be bad for your kids
You may also like
2 years ago
'Maybe see you again one day': Jacqueline Jossa sends fans wild as she hints at possible EastEnders return
2 years ago
Jacqueline Jossa is creating a clothing collection for 'working mums'
2 years ago
Jacqueline Jossa defends herself after fans criticise her for leaving her kids to enter the jungle
2 years ago
Kylie Jenner sent a message to Jacqueline Jossa and her reaction was priceless
2 years ago
'This isn't new for me' Jaqueline Jossa addresses cheating claims about husband, Dan Osbourne
2 years ago
I'm A Celeb's Jacqueline Jossa had the best response to pregnancy rumours
Next Page