For the first time ever, the United Nations is letting the general public have their say on important decision making.

David Attenborough has long been an advocate for action to combat climate change. When the US withdrew from the Paris Agreement last year.

International climate talks are due to take place in Poland next month on 3 December at the conference COP24 and David Attenborough will take up what the UN is calling “the people’s seat”, and will give “the people’s address” to governments at the talks based on views gathered from the general public in the run-up to the meeting.

Don't miss your chance to join world leaders & have your say on the defining issue of our time - climate change. Sir David Attenborough explains how you can take #ClimateAction. https://t.co/gQVBPnkDnx pic.twitter.com/LvqwasqvlI

Prior to this, people are invited to share their opinions on social media using #TakeYourSeat and the initiative is really taking off. The public are taking to Twitter in their masses to air their grievances. Lifestyle vlogger and environmentally conscious influencer, Niomi Smart took to Instagram Stories last night saying:

"As we all know, climate change is a massive issue and one that we should all be talking about."

Niomi has been asked to spread the word about Sir David Attenborough's campaign and she included some polls that viewers were invited to take part in answering. The questions included, "Do you agree that we have to act now to preserve the natural world for future generations?" and "Do you want leaders to step up in the fight against climate change?" 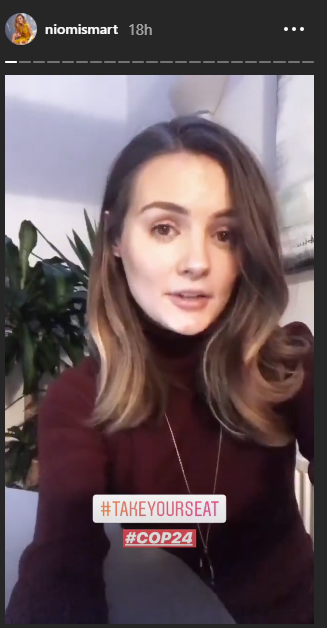 The United Nations also have The Lazy Person's Guide to Saving the World which gives simple, easy-to-implement tips that people can incorporate into their daily life to be more environmentally friendly.

"Decisions will be made that will affect every life on this planet."

So it just might be the most important thing you ever do.

popular
Fans defend Khloe Kardashian for posing in hospital bed with her newborn
Breaking: Female child found with severe injuries in Co. Clare
Vaccine programme to roll out in primary schools
Expert says Cocomelon acts "as a drug" to kids' brains
Shows like Bluey and Peppa Pig are actually bad for kids, expert warns
Budget 2023: IVF to be publicly funded and free contraception for under 30s
Pippa Middleton helps shut down Prince William and Rose Hanbury affair rumours
You may also like
9 months ago
Michael D Higgins praises Ireland's resilience and courage in Christmas message
1 year ago
Woman becomes first to use greener gas and air during child birth
1 year ago
Toddler among at least 22 dead in New York and New Jersey flooding
1 year ago
Ireland to become warmer and wetter due to climate change
1 year ago
10 simple ways to make a difference this Earth Day
1 year ago
3 great books to spark a conversation with your kids about the environment
Next Page