Deborah James's mother Heather has opened up about her daughter's final moments.

The heartbroken mother lost her daughter to bowel cancer in June.

Heather spoke out about Deborah's battle with cancer in an interview with BBC Breakfast.

The mum said it doesn't feel right to outlive your own child.

She said: "We had some good times.

"I can remember lying in bed, probably just about a week or so before she died and she was quite poorly that night and she went, ‘I do love you’ and I went, ‘I love you’."

“She went ‘I have no regrets’ and I went ‘That’s brilliant’, how many people could say that?"

"But she did say I don’t want to die. And that’s the hardest, saddest part," Heather said.

'I said to her I don't know what I'm going to do when you go and she said you will continue and you will enjoy life'
Heather James spoke to #BBCBreakfast about her daughter - Dame Deborah James, the campaigner and blogger who died from bowel cancerhttps://t.co/AOzfMgxMOi pic.twitter.com/uSYqU0RP1e 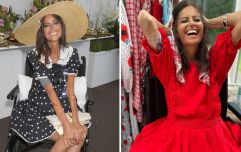 END_OF_DOCUMENT_TOKEN_TO_BE_REPLACED

"I think the hardest thing was knowing she was going to die."

"My heartache was knowing as a mother I couldn’t do anything about that and I think that was the hardest for me to cope with."

Heather said the waves of public support have helped them cope with the loss. She said it's beautiful to see the impact her daughter made during her short life.

Dame Deborah James died from cancer at the age of 40.

"We are deeply saddened to announce the death of Dame Deborah James; the most amazing wife, daughter, sister, mummy. Deborah passed away peacefully today, surrounded by her family."

"Deborah, who many of you will know as Bowelbabe, was an inspiration and we are incredibly proud of her and her work and commitment to charitable campaigning, fundraising and her endless efforts to raise awareness of cancer that touched so many lives."

popular
Breaking: Female child found with severe injuries in Co. Clare
Vaccine programme to roll out in primary schools
Fans defend Khloe Kardashian for posing in hospital bed with her newborn
School threatens to suspend pupils who don't follow "outdated" uniform rules
5 not-to-be-missed events and activities for kids taking place in Dublin this autumn
This episode of Peppa Pig is reportedly brainwashing kids
Shows like Bluey and Peppa Pig are actually bad for kids, expert warns
You may also like
2 months ago
Bowel cancer signs to be displayed on packs of toilet roll in Aldi
3 months ago
Deborah James says emotional goodbye to her brother as he travels to US for holiday
3 months ago
Deborah James was given just days to live when discharged from hospital in May
3 months ago
Bowel cancer warnings should be on toilet paper, Deborah James says
3 months ago
"Making memories can be hard when you are dying": Deborah James praised for honesty about cancer battle
4 months ago
Deborah James praises doctors who gave her more time with her children
Next Page