The trailer for HBO's Princess Diana documentary is here

The Princess lands on HBO Max on August 13th.

HBO has released the trailer for their upcoming documentary about Diana Spencer, which is titled The Princess.

The Princess will be released next month, and it coincides with the 25th anniversary of her death.

"#ThePrincessHBO, an original documentary and portrait of Princess Diana's life in the constant glare of the media spotlight, premiers August 13 on HBOMax."

The trailer opens with footage of Charles and Diana being quizzed by reporters over their first impressions of one another.

Charles says: "I remember thinking what a very attractive 16-year-old she was."

A modern woman. A historical monarchy. An uncontrollable public obsession.#ThePrincessHBO, an original documentary and portrait of Princess Diana's life in the constant glare of the media spotlight, premieres August 13 on @hbomax. pic.twitter.com/MW6Qu9cdTd 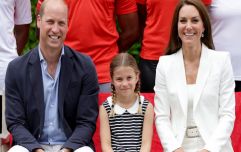 END_OF_DOCUMENT_TOKEN_TO_BE_REPLACED

As the trailer continues, viewers are privy to the obsession the press had with Diana when she married into the British Royal Family, with one journalist describing Diana as "the best thing that has happened to the monarchy in centuries".

Another comment is that she has "the common touch".

However, as the trailer continues we see the press' reaction to their marriage falling apart as paparazzi crowd Diana at every turn.

"It's the media that's caused their problems," one bystander says. "I think we should leave them alone."

Another describes the press' treatment of Charles and Diana as an "unhealthy obsession".

"When you put a modern person in an ancient institution, they will be destroyed," one commentator says.

We also see real-life footage of the public's reaction to Diana's death, after she was killed in a car accident in Paris in 1997.

It ends with an emotional clip of Charles and Diana with Prince William as a toddler. As photographers capture them, Charles shows his son how a camera works, telling him: "There are people in there. Look at them. Trapped."


popular
Should schools consider introducing a three-day week?
14-year-old boy drowns at hotel in Turkey after family wedding
Body of woman discovered in unexplained circumstances
Prince William and Kate's kids won't have a live-in nanny for the first time in their lives
Inside Prince William and Kate's beautiful new home in Windsor
Level 5: 10 really cool colouring pages to print and colour in from Pinterest
Scotland set to be the first country to provide free period products
You may also like
3 weeks ago
Revealed: The cheeky nickname Prince George's classmates use for him in school
3 weeks ago
Prince Harry's tell-all memoir to be released by Christmas
3 weeks ago
The sweet bedtime ritual Prince Charles treats his grandchildren to has been revealed
1 month ago
Kate made Prince George wear suit to Wimbledon to 'prepare him for future as king'
1 month ago
Isn't it time Prince William and Kate let their children dress like actual kids?
1 month ago
"You're disgusting": Prince William roars at photographer who was 'stalking' his family
Next Page