Disney has revealed the first look at the highly anticipated live-action version of the Lion King - and, honestly, we need 2019 to get here quicker.

The 90-second clip starts off with Musafa - played by James Earl Jones, who is reprising his role from the original - talking to Simba, before showing that iconic moment between Rafiki and the future king.

As the camera pans across the African savannah, Musafa tells his son:

"Everything the light touches is our kingdom. But a king's time as ruler rises and falls like the sun.

"One day, the sun will set on my time here, and will rise with you as the new king."

Then of course, "Circle of Life" arrives right on cue.

It then cuts to all of the animals approaching Pride Rock as Rafiki introduces them to all to the tiny cub - and future king - Simba.

Looking awfully similar to the trailer from the 1994 original (not that we're complaining), it ends by displaying the date: July 19 2019. 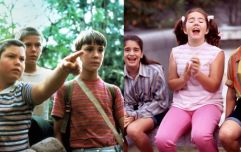 Movie night with your teenager?: 9 of the best coming of age movies

END_OF_DOCUMENT_TOKEN_TO_BE_REPLACED

The star-studded cast also includes Donald Glover - aka Childish Gambino - as an adult Simba; Beyoncé as Nala; Seth Rogen and Billy Eichner as Pumbaa and Timon; and John Oliver as Zazu.

Meanwhile, Chiwetel Ejiofor has been cast as Scar and Alfre Woodard as Sarabi, andJD McCrary voices Young Simba - the cub who just can't wait to be king.


popular
Heavy downpours and thunderstorms expected this week, Met Eireann warns
Kourtney Kardashian and Travis Barker officially tie the knot
I feel like my teenage son is blackmailing me for money
"My whole world": Sam Faiers gives birth to her third child
You will now have to pay to return your clothes to Zara
Bridgerton has replaced one of its original cast members
10 baby names that are lovely – and will stand the test of time
You may also like
3 months ago
Joseph Gordon-Levitt set to star as Jim Jones in new Jonestown movie
6 months ago
5 classic kid-friendly Halloween films perfect for a movie marathon
7 months ago
"People are great": Patrick Dempsey says he fell in love with Ireland while filming Disenchanted
7 months ago
Coco is officially the Ireland's favourite Pixar film, according to science
11 months ago
Enchanted sequel: New pictures from the Enniskerry set as filming gets underway
1 year ago
Downton Abbey 2 is officially coming to cinemas this Christmas
Next Page