They have since apologised.

Disneyland Paris has had to apologise to a mother after she was told to stop breastfeeding her baby in the park.

A female visitor to the park witnessed the incident on Sunday tweeted about her outrage when two security guards approached the woman and asked her stop feeding the baby.

The woman tweeted: "Yesterday your security guards prevented a mother from breastfeeding her 2 month old baby on the grounds that it shocked foreign customers! In France, in July 2021! Obstruction of breastfeeding, where are we?"

The original tweet was in French, and the woman tweeted a picture of the incident along with tagging the French government.

In response, Disneyland was forced to apologise, explaining to the woman that they deeply regret how the interaction went down.

"We deeply regret this situation and once again offer our sincere apologies to the mother concerned. The request made of it is not in line with our rules of procedure and our values. There are no restrictions on breastfeeding at Disneyland Paris," they said. 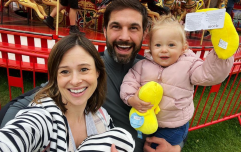 END_OF_DOCUMENT_TOKEN_TO_BE_REPLACED

"Disneyland Paris provides parents with young children with various service locations within the destination for those who would prefer a dedicated location. Disneyland Paris is committed to providing a welcoming and inclusive environment for all families."

French minister for citizenship Marlene Schiappa, who was tagged in the original tweet, also chimed in to condemn the incident, saying it is not an "offence" to feed your child.

She said: "Breastfeeding a baby is not a crime. It's good that you have dedicated rooms, but you don't decide when or where a baby is going to be hungry. Don’t start stigmatising mothers too, it’s hard enough everywhere else. Thank you in advance."

You may also like
1 week ago
World Breastfeeding Week: 5 things you can do to support a breastfeeding mother
2 weeks ago
New bill calls for more support for breastfeeding mums returning to work
1 month ago
Opinion: The obsession with routines and sleep training for babies is weird – and stressful
1 month ago
Mum gets mixed reaction to photo of her drinking beer while breastfeeding
2 months ago
Not everyone breastfed before formula was invented, you know
3 months ago
Irish doctors support calls to ban baby formula ads
Next Page