A dog has died after ingesting Xylitol in West London. The dog ate a brownie which included the sweetener that is toxic to dogs.

Ruby, a Hungarian Vizsla, cheekily stole the brownie and ate it, however 36 hours later she became ill and further deteriorated over the next week.

Ruby's owner, Kate Chacksfield, was left devastated when her dog died just eight days later. She's now sharing her story in hope it will make other dog owners more careful about leaving food around the house.

She told the Metro: "I only made brownies with Xylitol in to reduce the amount of sugar I was eating. But while I was out, Ruby managed to get into the container off the side in the kitchen and eaten a couple.

"She seemed fine at first and it wasn’t until a couple of days later she began being violently ill and I took her to the vets. I had no idea how serious eating natural sweeteners was for dogs, the photos of her on life support still make me cry. 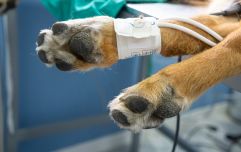 Gardaí investigating after "gruesome" discovery of decapitated dog in Dublin

END_OF_DOCUMENT_TOKEN_TO_BE_REPLACED

"We’ve had her since she was a puppy and I’m completely lost without her."

Kate said that in previous years Ruby had eaten sweet treats but her vet said that small amounts of chocolate weren't too harmful for a dog her size.

"I had absolutely no idea Xylitol was harmful to dogs what so ever and I was heartbroken when they told me and I knew it was too late for Ruby.

"I really, really urge other dog owners to read up on the dangers of Xylitol in dogs and urgently take their pets to the vet if they accidentally consume it as it could be the difference between life and death."


popular
Kourtney Kardashian and Travis Barker officially tie the knot
I feel like my teenage son is blackmailing me for money
"It can happen": Mum issues stark warning to parents after her dog attacks toddler
Bridgerton has replaced one of its original cast members
"My whole world": Sam Faiers gives birth to her third child
Movie night with your teenager?: 9 of the best coming of age movies
Irish mum-of-two dies in Turkey after travelling for medical procedure
You may also like
1 week ago
My 13-month-old won't walk because she thinks she's a dog
4 months ago
Stacey Solomon admits she feels "sad and guilty" over death of beloved dog
6 months ago
Pet dog catches Covid from its owner for first time in UK
6 months ago
This dog can fetch cocktails for its owner when it hears "gin o'clock"
6 months ago
'It's me or the dog' - this woman is at loggerheads with her husband over their dog
7 months ago
New Colombian law gives workers two days off to mourn their pets
Next Page