Don't Panic... But Irish Beaches Have Been Invaded By GIANT JELLYFISH

We're in for some blissfully warm weather this weekend, but pasty Irish humans in Speedos aren't the only mildly terrifying thing heading for our coastline.

Swimmers have been warned to avoid some beaches in the east and south of the country after venomous Portuguese man o'war and lion's mane jellyfish washed up on the sand. 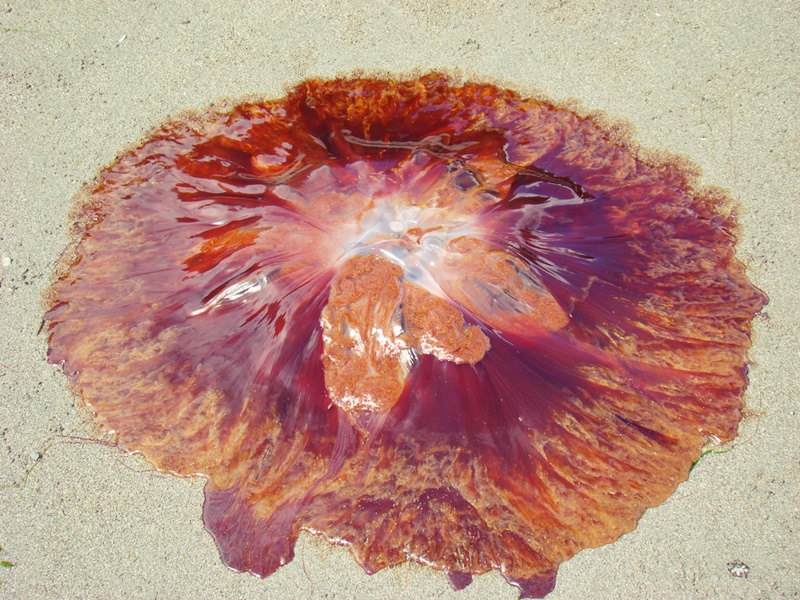 A red flag is flying at Sandycove in Dublin, with a swimming ban in place by Dún Laoghaire-Rathdown County Council. A council statement read:

"We have raised the red warning flag in Sandycove and erected signs warning swimmers of the presence of jellyfish in the water and washed up on the beach,"

Bathers are advised not to enter the water due to the presence of these jellyfish whose sting can be dangerous and cause serious symptoms including nausea, vomiting and respiratory distress."

Named after an 18th-century armed sailing ship, the Portugese man o'war has venomous tentacles capable of delivering a painful (and sometimes fatal) sting, even when washed up on the beach.

A Jellyfish ID card drawn up by the Jellyfish Action Group of Ireland and Wales @IWSie https://t.co/LkA0hJOMXt

END_OF_DOCUMENT_TOKEN_TO_BE_REPLACED

The stings result in severe dermatitis and long, thin open wounds resembling those caused by a whip. The best immediate treatment in an emergency is to pour salt or salt water on the wound, but beware; the water can rinse the venom onto another part of the victim's body or onto another person, resulting in fresh stings.

The lion's mane jellyfish uses its stinging tentacles to capture, pull in and eat prey such as fish, sea creatures and smaller jellyfish. While their stings are not known to be fatal, they are painful and a sting should be rinsed with vinegar as soon as possible.

popular
Brian Dowling: "Aoife never thought the baby was hers"
Lauren Graham shares who she thinks Rory's baby daddy is
The ultimate list of Santa Experiences to get booking now
He's back! 10 easy peasy Elf return ideas to kick off December with
Stuck For a Baby Name? Let These Online Generators Do The Work For You!
7 Christmas markets and Santa experiences to visit with kids this winter
"A heart of gold": Tributes pour in for Kate Donohue and her baby boy
You may also like
1 week ago
Spencer Matthews to climb Everest in bid to find brother's body
2 weeks ago
David Walliams could be removed from Britain's Got Talent following 'offensive' remarks
2 weeks ago
Government's five-day domestic violence leave plan criticised
2 weeks ago
No evidence Archie Battersbee was taking part in online challenge, coroner says
1 month ago
Former President Mary McAleese commemorates child victims of the Holocaust
1 month ago
Emma Watson pens heartfelt tribute to Robbie Coltrane
Next Page