The Late Late Toy Show is well and truly underway.

The Christmastime TV staple is taking on The Greatest Showman - and after Ryan's opening number for the night and the first 'one for everyone in the audience', we met the first guest: Davy.

He made an impression with viewers straight off the bat, telling Ryan that his time testing toys on the stage better not go like it went in rehearsals.

Which made viewers absolutely adore him - and really, really want to know what actually happened during rehearsals.

Davey is a National Treasure #LateLateToyShow 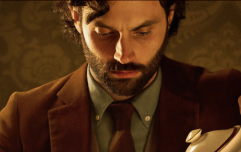 Here's your first look at Netflix's YOU season 4

END_OF_DOCUMENT_TOKEN_TO_BE_REPLACED

Things seemed to be going relatively smooth afterwards - despite a bit of an...issue with Mary Poppins.

But when Ryan asked him what his favourite toy of the night had been, Davy had an absolutely brutal - but hilarious - answer.

"The one you forgot to bring out," he told the host.

"I think it was the one we forgot to put out"
Maybe we'll see Davy's favourite toy next year.#LateLateToyShow live now pic.twitter.com/25ZbjcwmAe

As the audience burst into laughter, Ryan tried to get Davy to tell him exactly which one it was...and that didn't go too much better, either.

"Remember that dog we forgot to do in rehearsals?"

After a brief second of trying to remember, Ryan gave up - and simply thanked Davy for coming on the show.

Ryan: “What was your favourite toy that we gave you?” Davey: “I think it was the one you forgot to bring out.” This is why I love this. #LATELATETOYSHOW

"What's your favourite toy, Davey?" "I think it's the one you forgot to put out" Ahhh yes, only in Ireland #LateLateToyShow

Go Davy! Fave Toy - "the one you forgot to put out". Davy is why we must never give up on LIVE TV. #LateLateToyShow

“What’s your favourite?”
“It’s the one you forgot to put out”
THIS REALLY IS THE GREATEST SHOW ON EARTH #LateLateToyshow

popular
It looks like Ireland could get a white Christmas this December
Today FM's Paula MacSweeney welcomes baby boy
Has Molly Mae Hague accidentally revealed her baby's gender?
These baby girl names were used only five times last year
Here are the baby name trends set to dominate 2023
Inbetweeners co-stars Joe Thomas and Hannah Tointon welcome their first child
Kelly Osbourne responds to backlash over deciding not to breastfeed
You may also like
4 weeks ago
Gemma Owen reportedly set to star in show about footballers' daughters
3 months ago
Clever! This is the No.1 reason your child is obsessed with Peppa Pig
3 months ago
Netflix CEO confirms adverts will be added to the streaming service
4 months ago
The trailer for Everything I Know About Love is here and it looks incredible
4 months ago
The Toy Show Musical looking for a young girl to star in lead role
4 months ago
Viewers believe Bluey is a rainbow baby- check out the theory
Next Page