The storyline will have viewers in 'stitches'.

After months of will-they-or-won't-they, the pair are finally set to get together.

Gemma will reportedly fall pregnant after she and Chesney share a "night of passion" - and, during her scan, will find out she's expecting quadruplets.

A source told The Sun that the series' new boss, Iain MacLeod, is aiming to bring back "a bit of old-fashioned humour into Coronation Street like in the years gone by." 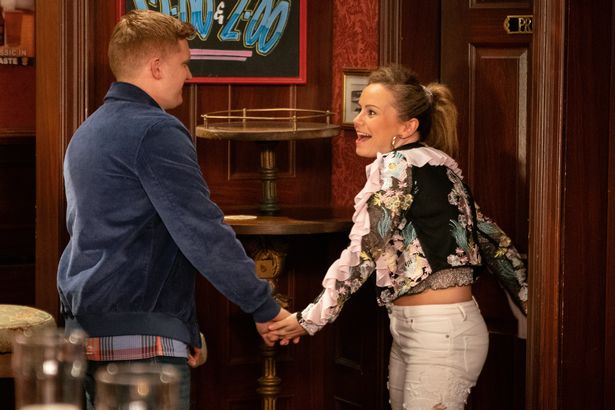 "This ­storyline will have viewers in stitches. Gemma doesn’t miss a trick and instantly thinks of ways she can make some dosh out of her and Chesney’s unexpected news.”

END_OF_DOCUMENT_TOKEN_TO_BE_REPLACED

The young couple's news won't come as too much of a surprise to landlady Rita Sullivan, who is said to get fed up with the pair after they get together and "act like rabbits".

She gets so fed up that she reportedly ends up kicking them out of her house.

Chesney is already a dad-of-one. He had a son with his ex girlfriend, Katy Armstrong, who was killed in a car crash off-screen in 2017.


popular
A Tyrone midwife was chosen to feature on the cover of Vogue
Kids still got a pesky case of lice with school out? Here's how to fix it
Energia and GIY are giving away free grow boxes so you can start a vegetable patch with your kids
Better sleep: 5 things you need to ban from your bedroom according to an organisational expert
Get ready to live like the stars because Lidl is selling an entire home cinema range
Raising boys: The beautiful words every boy mum needs to read
These 5 Foods Could Increase Your Chances of Having Twins
You may also like
1 month ago
Here’s the line-up for the first virtual edition of The Graham Norton Show tonight
2 months ago
RTE are set to broadcast an hour of 'school on TV' everyday from Monday
3 months ago
Joanne Froggatt has ruled out a season three of Liar
3 months ago
Liar's Joanne Froggatt teases what fans can expect from season two
3 months ago
ITV's new crime drama Honour will be the TV show that everyone is talking about this year
3 months ago
There's a Golden Girls-themed cruise setting sail next year and we're packing our bags already
Next Page