Yesterday, Kensington Palace shared photos to mark Father's Day but followers were quick to point out that only Prince Louis, the youngest member of the Cambridge family, was included in these shots.

There wasn't any sign of Prince George or Princess Charlotte and people have a LOT to say about that.

Not only that but they're also wondering why Prince Chares was featured and not Kate Middleton's dad, Michael.

All a bit confusing really and it wasn't long before the comments started rolling in, questioning these decisions.

With requests for photos of William and Kate's three children, the main takeaway was one of complete bemusement at why Prince Louis was the only child to feature. 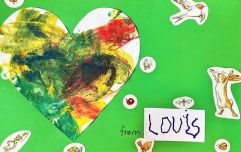 END_OF_DOCUMENT_TOKEN_TO_BE_REPLACED

Others were quick to explain that because Michael isn't a member of the royal family, he shouldn't be expected to make an appearance on the official Kensington Palace Instagram account.

While the majority of comments related to George and Charlotte, some remarked that the photos were gorgeous nonetheless and summed up the message of Father's Day.

That hasn't stopped people from having their say and even today, 24 hours after the post, there's still traction as followers continue to share their thoughts.

Of course, the photos are very sweet and it's a very sentimental choice but that hasn't discouraged followers from going IN and making their feelings very much known...


popular
First Dates Ireland's Mateo Saina welcomes baby boy with partner Vjerana
4-month-old baby killed during police shoot out
CUMH allow partners to attend 20 week scan and post-delivery
Five quirky Irish children's clothing shops that you should check out in 2020
Can you pronouce these 7 'unique' baby names? They're trickier than you think
How to be a body positive parent (Spoiler: It starts with you!)
16 nostalgic baby names which are inspired by your favourite classic cartoon characters
You may also like
5 months ago
George, Charlotte and Louis will help granny Carole Middleton decorate via Zoom this year
7 months ago
The Cambridge kids interview Sir David Attenborough in brand new (adorable) video
11 months ago
Kate and William are pretty strict about school nights when it comes to George and Charlotte
11 months ago
This smocked baby bodysuit from Next is giving us royal vibes
1 year ago
Kate Middleton says that she felt 'so isolated' after the birth of Prince George
1 year ago
Prince George wakes his mum and dad up every morning in the most hilarious way
Next Page