We can see where they're coming from.

In the past few weeks, the Kardashian sisters have been promoting their new fragrance on social media.

As part of Kim's cosmetics line, KKW, the three Kardashian sisters teamed up to bring fans three new scents, and nearly every day on Instagram we've seen its campaign pictures. In the latest one however, Khloe looks very different.

The reality star went brunette for the photo shoot, and fans are saying she doesn't look like herself.

Instead, everyone thought she looked like just about every one of her sisters.

It’s a sister collab!! Our @kkwfragrance diamonds collection is finally here! 3 beautiful scents that perfectly reflect our personalities. I cannot wait for you guys to smell these... I’m honestly in love with them all! ? KKWFRAGRANCE.COM 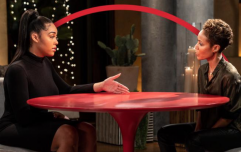 'You ARE the reason my family broke up': Khloe shares reaction to Jordyn's interview

END_OF_DOCUMENT_TOKEN_TO_BE_REPLACED

One person wrote, "Khloe looking like Kylieeeee," while another said "Lmao I did NOT recognise Khloe. I thought it was: Kourtney, tall Kourtney and Kim."

One more added: "I thought Khloe was Kendall."

Well, what do you think? Many said that they prefer Khloe as a brunette but we have to say we love her blonde locks!


popular
The 30 baby names that are going to be super popular in 10 years time
Unstructured play is vital for kids, so we need to stop entertaining them
10 beautiful baby girl names none of your friends will have thought of first
Kristen Bell reveals the potty training hack that finally helped get her daughter out of nappies
Flower power: 11 cute baby names perfect for your summer baby
10 baby boy names forgotten in time – that we reckon deserve a second chance
14 super sweet and short Icelandic names perfect for baby girls
You may also like
1 year ago
Kim Kardashian just dyed her hair cherry red, and she looks amazing
1 year ago
Khloé Kardashian had the best response after being 'mom-shamed' over having long nails
1 year ago
Kim, Khloe and Kylie have just copied Victoria Beckham's unusual parenting move
1 year ago
Khloé Kardashian and Tristan Thompson have reportedly broken up
1 year ago
Kourtney Kardashian posts snap of her daughter's first haircut in six years
1 year ago
This clip of baby True Thompson giggling will make your ovaries ache
Next Page