Where do you usually leave your car keys when you come into the house?

If it's on a table near a door, you might want to rethink your routine.

An Garda Siochana have issued a warning on their Twitter page after a car was stolen when thieves pulled the keys out through a letter box.

Gardaí included a picture of the car, which has since been recovered, and said that people should think twice about leaving their keys in open view on kitchen tables, hall tables, window sills, counter tops, or wall hooks.

They added that this would be particularly dangerous if any of these places were near a front door. 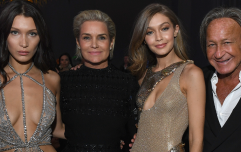 END_OF_DOCUMENT_TOKEN_TO_BE_REPLACED

It has been widely reported in recent years that car thieves are becoming far more crafty with their techniques.

The Irish Times reported in 2015 that criminal gangs were using electronic devices to take over the computer systems protecting high-end vehicles.

Although the letter box method is not as high-tech, it's still making car thefts easier for criminals.

We'll think twice before throwing our car keys down on a hallway table as soon as we come home now.


popular
Tom Cruise slated for "inappropriate" behaviour around Kate Middleton
What exactly is monkeypox and is it dangerous?
10 hotels with self catering that are perfect for a family staycation
Gardaí investigating attempted abduction of 7-year-old boy
Only a matter of time before monkeypox spreads to Ireland
Rihanna fans slam Chris Brown for commenting on her baby news
Westlife announce special guests for their stadium shows this summer
You may also like
3 weeks ago
18 gas tweets about potty training that are all too accurate
1 month ago
20 bedtime tweets that hilariously capture every parent's nightly struggle
1 month ago
15 Pregnancy tweets that perfectly sum up the whole experience
4 months ago
Cardi B says she's "close" to tattooing her son's name on her face
7 months ago
Woman charged fee for "brief emotion" during mole removal
10 months ago
The funniest parenting tweets of the week
Next Page