How grandparents can be integral in spotting autism

Grannies have long been a vital source of support when it comes to new motherhood, but the latest study from New York shows they are also sharper at spotting the earliest signs of autism.

According to new research conducted at The Seaver Autism Center for Research and Treatment at Mount Sinai, approximately 50 percent of friends and family members reported that they had suspected a child to have a serious condition before they were aware that either parent was concerned.

Maternal grandmothers and teachers were the two most common relationship categories to first raise those concerns.

The study of 477 parents of children with autism, published in the journal Autism, showed that when infants had frequent interaction with a grandmother, it reduced the age of ASD diagnosis by 5.18 months.

Frequent interaction with a grandfather reduced the age of diagnosis by 3.78 months.

“Many parents avoid seeking help to find a diagnosis for their child, even though they know something might be wrong,” says study co-author Nachum Sicherman, PhD, Carson Family Professor of Business at Columbia Business School. 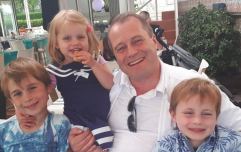 END_OF_DOCUMENT_TOKEN_TO_BE_REPLACED

“They often ignore signs of a larger problem and look the other way, making the role of close family members and friends vital to accelerating diagnosis and helping a child’s condition.”

Previous research found that parents’ behaviour affects the age of diagnosis, but a major finding of this study is that individuals other than parents play a key role in flagging a problem, often leading to earlier diagnosis.


popular
Viewers raise over €290,000 after Munster's Billy Holland and wife Lanlih's emotional Late Late Show appearance
Angelina Jolie 'doesn't care' about Brad and Jen's reunion - and unfortunately, she's the only one
Expecting a baby boy? 10 short and sweet names that are actually really cool
Brad Pitt's response to the drama over his reunion with Jennifer Aniston is interesting, to say the least
The most popular baby names in the world have been revealed
Unstructured play is vital for kids, so we need to stop entertaining them
The ironing hack that's about to make your everyday life so much easier
You may also like
17 hours ago
Gardaí name three children whose bodies were found in Dublin house yesterday
19 hours ago
Met Éireann state that three days of snow, hail, and sleet is coming for parts of Ireland
1 day ago
Domestic abuse shouldn't be a 'marginal issue' for #GE2020, says charity
2 days ago
Aldi to recruit 550 new staff and implement living wage rate for employees
2 days ago
Met Éireann issue status yellow fog warning for the whole country
5 days ago
Period products will soon be free in all schools and colleges in England
Next Page