Hairdresser's post about depression has gone viral for an important reason

"A child should never feel so worthless."

A hairdresser "had one of the hardest experiences" in her career when she refused to shave off a depressed teenager's hair - spending 13 hours fixing it for her instead.

Kayley Olsson, a student hairdresser from Iowa, recently shared the story of the anonymous teenager who sat in her salon chair on Facebook.

She told how the 16 year old had been dealing with severe depression for years, leaving her feeling so worthless that she was unable to brush her own hair. 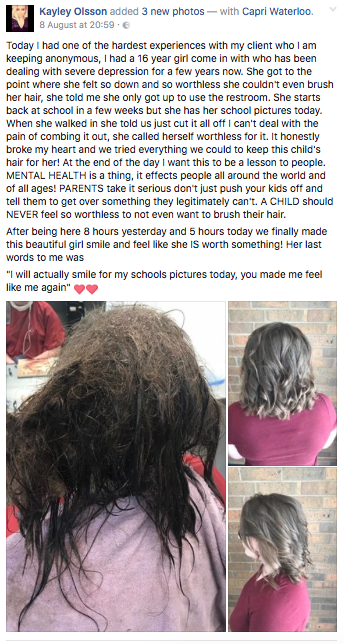 The unnamed teen asked Kayley to shave off her hair in time for her school picture day - but the hairdresser refused, spending 13 hours fixing it for her instead.

"I had a 16 year girl come in with who has been dealing with severe depression for a few years now.

"She got to the point where she felt so down and so worthless she couldn't even brush her hair, she told me she only got up to use the restroom.

"She starts back at school in a few weeks but she has her school pictures today. When she walked in she told us just cut it all off I can't deal with the pain of combing it out, she called herself worthless for it.

"It honestly broke my heart and we tried everything we could to keep this child's hair for her!

"At the end of the day I want this to be a lesson to people.

"MENTAL HEALTH is a thing, it effects people all around the world and of all ages! PARENTS take it serious don't just push your kids off and tell them to get over something they legitimately can't.

"A CHILD should NEVER feel so worthless to not even want to brush their hair.

"After being here 8 hours yesterday and 5 hours today we finally made this beautiful girl smile and feel like she IS worth something!

"Her last words to me was, 'I will actually smile for my schools pictures today, you made me feel like me again'".

And Kayley's post has touched hearts around the world, racking up almost 70,000 shares and more than 166,000 reactions.

Thousands of people have also taken to the comments to share their own stories about their battles with depression.


popular
Brother of Amber Gibson charged in connection with her death
"She is too young": Kourtney Kardashian mum-shamed over daughter's latest TikTok
Alec Baldwin interview: everything the actor said about the Halyna Hutchins shooting
Tánaiste Leo Varadkar reassures kids that Santa will visit Ireland this Christmas
Father and girlfriend found guilty over death of 6-year-old Arthur Labinjo-Hughes
Here are the final post dates for Christmas 2021
"He was my best friend": Mother of Arthur Labinjo-Hughes pays tribute to her son
You may also like
2 weeks ago
Mum shares important warning after almost losing her newborn to a kiss
2 weeks ago
Mum who helped deliver best friend's baby finds out her husband is the dad
2 weeks ago
A TikTok mum shares life tips for people who doesn't have a mum in their lives
3 weeks ago
Teacher has a very strong reaction when 8-year-old gets her first period in school
3 weeks ago
Mum issues warning after toy she ordered online almost killed her toddler
4 weeks ago
"I just had a baby": My husband criticises me for bleeding after birth
Next Page