Huge congratulations are in order for Justice Minister Helen McEntee.

Justice Minister Helen McEntee has announced she is pregnant with her second child.

McEntee shared a sweet photo of her son Michael to confirm the news.

In the photo, her son is wearing a t-shirt that says 'I'm gonna be a big brother'.

Alongside the adorable photo, the Justice Minister wrote, "So Michael has some news to share."

Her followers showered her with loving messages after the announcement.

"Fab news, congrats all. Michael will be a great big brother," another added. 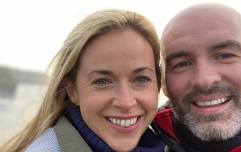 END_OF_DOCUMENT_TOKEN_TO_BE_REPLACED

One shared, "Lovely news for a very hard-working lady. Best of luck."

"Great news! Congratulations, you are a trailblazer Minister," another wrote.

The soon-to-be mum-of-two is due to give birth in December.

A spokesperson for Minister McEntee also confirmed her special news.

They stated, "The Minister and her husband Paul are very happy to be expecting their second child, due in December.

“Minister McEntee intends to take maternity leave to care for their baby.”

As well as becoming a mum, McEntee also became the first female minister to welcome a baby while serving in Cabinet.


popular
TikTok star shows how to avoid sweat stains by using pantyliners
Forget about ultra cheap Ryanair flights for the foreseeable future, O'Leary warns
Opinion: All schools should have generic school uniforms
3 reasons why switching mortgage providers now could help you save some cash
Giving our children experiences rather than toys makes them more intelligent
Archie Battersbee's mother issues warning about TikTok challenges
5 touching alternatives if you're not too keen on christening your baby
You may also like
3 days ago
Lottie Tomlinson and Lewis Burton welcome their first child together
1 week ago
Baby joy for actor Barry Keoghan and his girlfriend Alyson
1 week ago
It's a girl! Leona Lewis and Dennis Jauch welcome their first child
2 weeks ago
Vogue Williams says she's open to having a fourth baby
3 weeks ago
Emmerdale star Michelle Hardwick and wife Kate expecting their second child
3 weeks ago
Officials concerned Irish babies may have been exposed to 'highly toxic nappies'
Next Page