There's has been rumours swirling in the past few months about who will present the highly anticipated Ireland's Got Talent.

And now, it has been revealed that Lucy Kennedy will host the entertainment show.

According to independent.ie, the mum-of-three will take to the talent show stage and has beat out the likes of Laura Whitmore and Baz Ashmawy, who were tipped to take on the presenting role.

It has further been reported that Denise Van Outen will take on one of the judging gigs, as well as comedian Jason Byrne and RuPaul's Drag Race star Michelle Visage.

A source told the Irish Mail on Sunday that Louis Walsh was in talks to appear on the judging panel too, but turned it down because of the fee.

"There has been an exhausting search for the right balance," the insider said. "Denise and Jason are household names but Michelle Visage is an international star. 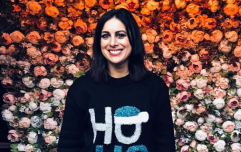 END_OF_DOCUMENT_TOKEN_TO_BE_REPLACED

"She has personality and class and a string of incredible one-liners. She could be the real star of the show.

"There was also a Pussy Cat Doll as well but in the end, we feel that this is the right line-up.

They continued: "We had tried to get Louis Walsh and up until this weekend we were talking to him, but unfortunately he was not interested.

"But he will be on TV3 in a few weeks as The X Factor judge so it is still a winner for TV3,"

It has been reported that auditions for Ireland's Got Talent will commence just before Christmas, with the series going live in January.


popular
Five teenage girls rushed to hospital after crash in Kilkenny
Opinion: All schools should have generic school uniforms
How to keep your fake tan on for longer during the heatwave
Baby twins die in hot car after dad forgets to drop them to creche
Ekin-Su and Davide taking their mums to New York with Love Island winnings
Here's where you can get the best deals on all your Back to School essentials
Irish people could be treated to spectacular sights in the sky over the next few nights
You may also like
4 years ago
Kathryn Thomas's joke about being a new mother at the IFTAs is too relatable
4 years ago
Ireland's Got Talent judges didn't look too happy about last night's winner
4 years ago
Lucy Kennedy shares how she coped going back to work after her third baby
4 years ago
Everyone swooned for Lucy's Golden Buzzer pick on Ireland's Got Talent
4 years ago
Lucy Kennedy reveals the struggle of her teething baby
3 days ago
Eamon Ryan's mother dies suddenly in tragic accident
Next Page