TV duo Holly Willoughby and Philip Schofield respond to reports of a rift between them.

Over the last few days, rumours have circulated of a 'feud' between popular presenting team Holly and Philip, co-hosts of ITV productions This Morning and Dancing on Ice.

However, they attended the launch of Dancing on Ice 2019 last night and laughed at the notion that there was any animosity between them.

A question posed by BBC's Newsbeat asked if they were "sick of each other" and the answer was a very firm no.

Philip said that "they have such a laugh" and as fans of This Morning will agree, they always seem to have fun and get on very well together.

So much so that they have been known to go into fits of laughter at the same time, always a good indication of any friendship.

He went on to say:

"We're best mates, she's like the sister I never had. I just adore working with her, she's just perfect." 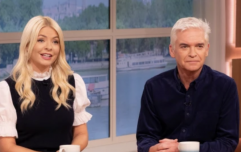 END_OF_DOCUMENT_TOKEN_TO_BE_REPLACED

Holly then chimed in, pointing out that their jobs require them to spend a lot of time together and it would be "impossible" to work together so closely if they didn't get on.

She also added that they go on holiday together which would suggest they're not sick of each other, quite the opposite, in fact!

"You couldn't do the amount of hours of TV that we do with each other without getting on."

They have co-presented the popular morning show for ten years and from 2020, it will be extended by half an hour, filling in a gap left by The Jeremy Kyle Show which was axed earlier this year.

It seems that all is well with Phil and Holly and there's no sign of this particular working relationship coming to an end anytime soon.

popular
Kelly Clarkson admitted she spanks her children if they misbehave
Today FM's Paula MacSweeney welcomes baby boy
Hilary Swank, 48, reveals she is pregnant with twins
It looks like Ireland could get a white Christmas this December
Lush to open its biggest Irish store this winter
Kelly Osbourne responds to backlash over deciding not to breastfeed
Rebekah Vardy asks Coleen Rooney to give legal fees to charity
You may also like
1 week ago
Holly and Phillip weren't on media list for Queen's lying in state
2 weeks ago
"Distraught" Holly Willoughby could quit This Morning over queue skipping backlash
2 weeks ago
Holly Willoughby and Phillip Schofield speak out against queue jumping claims
2 weeks ago
This Morning issues statement after Holly and Phil 'skip' lying in state queue
1 month ago
This Morning goes full Black Mirror by offering to pay energy bills as prizes
3 months ago
Holly Willoughby calls for mandatory dyslexia screening in schools
Next Page